Theology Made Practical: New Studies on John Calvin and His Legacy 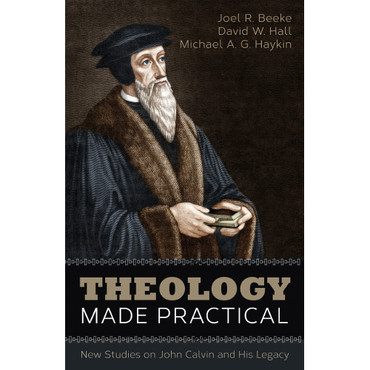 Theology Made Practical: New Studies on John Calvin and His Legacy

In Theology Made Practical, Joel R. Beeke, David W. Hall, and Michael A. G. Haykin declare the significance of John Calvin’s life and ideas—particularly his contributions to systematic theology, pastoral theology, and political theology—as well as the influence he had on others through the centuries. With focused studies related to the Trinity, predestination, the Holy Spirit, justification, preaching, missions, principles of government, welfare, and marriage, this book demonstrates how Calvin’s thought has been, and still is, a dynamic wellspring of fruitfulness for numerous areas of the Christian life. More than 450 years since Calvin experienced the beatific vision, his thinking about God and His Word still possesses what our culture passionately longs for—true relevancy.

1. The Young Calvin: Preparation for a Life of Ministry—Michael A. G. Haykin

2. Practical Lessons from the Life of Idelette Calvin—Joel R. Beeke

3. “Uttering the Praises of the Father, of the Son, and of the Spirit”: John Calvin on the Divine Triunity —Michael A. G. Haykin

4. Calvin on Similarities and Differences on Election and Reprobation—Joel R. Beeke

8. John Calvin and the Missionary Endeavor of the Church—Michael A. G. Haykin

11. Christian Marriage in the Twenty-First Century: Calvin on the Purpose of Marriage—Michael A. G. Haykin

13. Calvin as a Calvinist—Joel R. Beeke

14. Calvinism and Revival—Michael A. G. Haykin

Joel R. Beeke is president and professor of systematic theology and homiletics at Puritan Reformed Theological Seminary, and a pastor of the Heritage Reformed Congregation in Grand Rapids, Michigan.

Michael A. G. Haykin is professor of church history and biblical spirituality at The Southern Baptist Theological Seminary in Louisville, Kentucky.

“These essays by distinguished scholars cover important and sometimes neglected aspects of Calvin’s life and thought in a stimulating way. They help us see that Calvin indeed remains a solid, lively, and encouraging theologian for Christians today.”

“In every generation, including his own, John Calvin had agitatedly committed detractors. They desired to render his influence of no effect and his person deeply suspect. Those persons now are largely footnotes in books about Calvin. Why? This book demonstrates that answer clearly. The authors’ diversity of chapters illustrates that Calvin remains irreducibly seminal for the development of Western culture from the time of the Reformation and beyond. His experience of God and His grace, his mind and heart captive to divine revelation in Scripture, his commitment to apply clearly and succinctly the sovereignty of God and truth over all patterns of thought—these mark him out as a Christian thinker whose influence endures in every generation and who always has much to say about most things important for Christian living. You will see that conviction profoundly and sweetly foundational to the variety of Calviniana in this book.”

“Theology Made Practical is written by scholar-pastors about another scholar-pastor who studied and wrote as a theologian but labored and served as a pastor. The authors ably show that Calvin was not only concerned with theological precision but also with its practical value, a theology that ‘aim[s] at the needs of the soul.’ I highly recommend this insightful—and edifying—work on the great Reformer.”

“John Calvin stands as one of the giants in the history of Christianity. Unfortunately, his views are too often caricatured, his character is too often slandered, and his ministry priorities are too often misunderstood. In this helpful book, three respected church historians model for us how to write historical theology in service to contemporary pastoral theology. As a pastor-theologian with a keen appreciation for the church’s past, Calvin himself would no doubt appreciate their effort. Theology Made Practical is a helpful resource for evangelical pastors who care deeply about theology and evangelical theologians who are committed to pastoral application, even those who may not share all of Calvin’s Reformed sensibilities.”
—Nathan A. Finn, dean, School of Theology and Missions and professor of theological studies,
Union University