The Works of William Perkins (Volume 9) 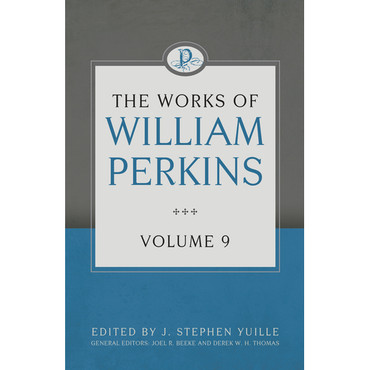 The Works of William Perkins (Volume 9)

This ninth volume brings together nine of Perkins’s lesser known practical treatises and, by so doing, introduces the reader to important facets of his religion of the heart.

It opens with two works on what it means to look to Christ: A Declaration of the True Manner of Knowing Christ Crucified and The True Gain.

This is followed by A Faithful and Plain Exposition upon Zephaniah 2:1–2, which gives an earnest call to repentance, and The Nature and Practice of Repentance as well as The Combat of the Flesh and Spirit, which give systematic explanations of the doctrine of repentance.

A Treatise of Man’s Imaginations discusses man’s desperate need for renewal of mind.

A Direction for the Government of the Tongue According to God’s Word argues that one’s speech is the most significant change related to a renewed heart.

The volume finishes with A Discourse of the Damned Art of Witchcraft and A Resolution to the Country Man on Prognostication, which rebuke those who dally with occult practices.

Each treatise in this volume occupies an important place in Perkins’s experiential piety—what he himself described as “the more sincere profession of religion.”

The Works of William Perkins fills a major gap in Reformed and Puritan theology. Though Perkins is best known today for his writings on predestination, he also wrote prolifically on many subjects. His works filled over two thousand large pages of small print in three folio volumes and were reprinted several times in the decades after his death. His complete works, however, have not been in print since the mid-seventeenth century.

From 1584 until his death, Perkins served as lecturer, or preacher, at Great St. Andrew’s Church, Cambridge, a most influential pulpit across the street from Christ’s College. He also served as a teaching fellow at Christ’s College, catechized students at Corpus Christi College on Thursday afternoons, and worked as a spiritual counselor on Sunday afternoons. In these roles Perkins influenced a generation of young students, including Richard Sibbes, John Cotton, John Preston, and William Ames. Thomas Goodwin wrote that when he entered Cambridge, six of his instructors who had sat under Perkins were still passing on his teaching. Ten years after Perkins’s death, Cambridge was still “filled with the discourse of the power of Mr. William Perkins’ ministry,” Goodwin said.

“On the broad shoulders of William Perkins, epoch-making pioneer, stood the entire school of seventeenth-century Puritan pastors and divines, yet the Puritan reprint industry has steadily bypassed him. Now, however, he begins to reappear, admirably edited, and at last this yawning gap is being filled. Profound thanks to the publisher and heartfelt praise to God have become due.” — J. I. Packer, Board of Governors’ Professor of Theology, Regent College, Vancouver, British Columbia

“The list of those influenced by the ministry of William Perkins reads like a veritable Who's Who of the Puritan Brotherhood and far beyond. This reprinting of his works, so long unobtainable except by a few, is therefore a publishing event of the first magnitude.” — Sinclair B. Ferguson, Chancellor’s Professor of Systematic Theology, Reformed Theological Seminary; teaching fellow, Ligonier Ministries

“There was no more important leader in the Puritan movement than William Perkins. To see his works reprinted in a reader-friendly format and with state-of-the-art critical apparatus as a bonus seems too good to be true. This project is a landmark event for both Reformation scholarship and the spiritual edification of Christians.” — Leland Ryken, professor of English emeritus, Wheaton College, and author of Worldly Saints: The Puritans as They Really Were

“William Perkins was arguably the single most seminal figure in the development of Puritan theology in England. This edition will make his works accessible to a much wider readership. It is to be welcomed.” — Robert Letham, professor of systematic and historical theology, Wales Evangelical School of Theology