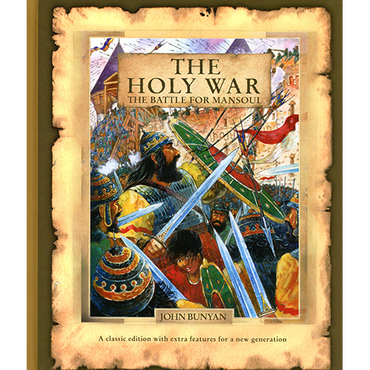 John Bunyan could be said to have authored the most influential book in the English language (other than the King James Bible) - The Pilgrim's Progress. But he has also written another dramatic allegorical novel - The Holy War.

The righteous and honourable ruler Shaddai and his son Immanuel rule Mansoul with justice and equity. But the ruler of darkness - Prince Diabolus - has other plans. With his evil captains and their battalions Diabolus plots the fall and destruction of the once happy city. The first to fall is Captain Resistance as Diabolus knows that there is only one route into the city and that it can only be breached through the permission of the people of Mansoul itself. With Captain Resistance gone the city is laid open to Diabolic lies and the next to fall is Lord Innocency and then the city is lost.

So begins a story of treachery and deceit, foolishness and pride, forgiveness and final redemption. In fact this is, as Bunyan intended it, the story of a sinner saved by the grace of God.

John Bunyan  (1628-1688) was born the son of a metalworker near Bedford, England. He went on to become a famous preacher and writer and during his life penned over 2 million words, his most famous work being ‘The Pilgrim’s Progress’.

Although I have read this book numerous times before, and had given it away to someone in need, I still enjoyed it immensely.
I heartely recommend this book to any born-again Christian who enjoys reading good conservative literary material. However, I recommend that the reader be quite knowledgable on the Bible because John Bunyan has used allegories to describe the war that goes on in every human: the war between God and Satan over the human soul. If you, dear reader, have ever read "Pil-grim's Progress" by John Bunyan, then you'll understand the necessity for being up on your Bible knowledge. John Bunyan did not write these books to be entertaining, he wrote them with the purpose of being spiritually helpful in understanding what every believer goes through. I myself am a born-again believer since 1975. There is a great deal of literary "junk-food" that tries to pass as being Christian, but is as shallow as a child's wading pool. The "Holy War" is more than "meat and potatoes", it could be considered "gourmet" reading for a mature and hungry Christian soul.