The Five Solas: Standing Together, Alone 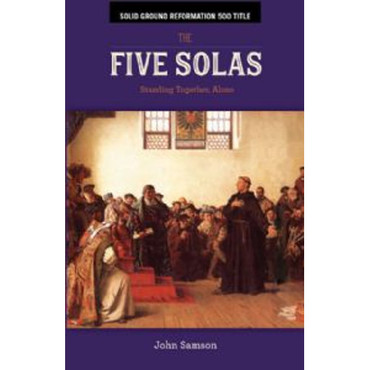 The Five Solas: Standing Together, Alone

R.C. Sproul recently wrote the author the following words: "YOU HAVE SUCCINCTLY AND CLEARLY DISTILLED THE ESSENCE OF THE 'SOLAS.' MAY GOD MIGHTILY USE YOUR BOOK FOR HIS GLORY. THANK YOU FOR THE ENCOURAGEMENT IN THE GOSPEL YOU HAVE BROUGHT ME."

"Some authors make you read three chapters before getting to the first point in their outline. If you wish to understand the foundation of the solas of the Reformation but would like to do so in under an hour, John Samson provides you with the basics right here." - Dr. James White, Alpha & Omega Ministries, Phoenix, Arizona

"Recent years have seen a number of key anniversaries connected with events and people who were vital catalysts in the Protestant Reformation. Thankfully this has resulted in a renewed focus on the 'five solas' - a convenient shorthand list of the Reformers' key convictions. Throughout church history, wherever these principles have been stressed and adhered to, the church has always flourished. So it is a highly encouraging trend. I'm thankful for this excellent booklet by John Samson; a cogent, focused, and accessible study of the solas that not only reminds us what these principles mean, but also shows us why they are important - and why they must stand together." - Phil Johnson, Executive Director, Grace to You

"This is such a crucial topic; and having read many pieces written on the five solas, this one stands out for not only being theologically sound, but also clear and concise. It is written in a way that just about anyone could pick up and understand. I am thankful that God has raised up his servant John Samson for this deeply needed work; a work we ought to get into the hands of as many people as possible." - John Hendryx, monergism.com

John Samson begins this vitally important work with the following few paragraphs. These are provided to whet your apetite for more -

"Light dispels darkness. When the light of God's Word shines into places of spiritual and cultural darkness, it transforms people, families and nations. It does not matter how long the darkness has persisted; when light appears, darkness, like a hostile, renegade, usurper to the throne, must submit, bow its head, and walk away in shame. Again, light dispels darkness. The entrance of God's word brings light!

Darkness is the shared experience of a people without light. Such was the case before the Protestant Reformation. The Bible was not known. In its place, religious superstition, tradition and falsehood reigned. The Reformation brought God's word and the Gospel back into the hands of the masses.

Man-made traditions that had kept the people in bondage for centuries were now exposed for what they really were. Entire nations, held captive by the powers of darkness, were now exposed to the truth. Dramatic change occurred. Outside the book of Acts in the New Testament, there has not been a greater move of the Holy Spirit in the history of the church. Our world would never be the same. A Latin phrase, 'Post tenebras lux' captured the enfolding, historical drama, meaning, 'After darkness, light!'

As the Bible came to be read in the common language of the people, the great central truths the Bible proclaimed were recovered, often at great cost to those who came to embrace them.

The Reformation recovered and highlighted glorious Scriptural truths which have been expressed in five memorable phrases, now known as the Five Solas. Properly understood, these Five Solas bring us back to the very heart of the Gospel of Jesus Christ."