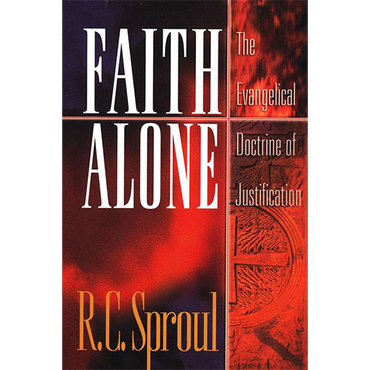 What can we add to God's mercy to be saved? The Reformers broke with the Roman Church when they answered that Christians are justified by faith alone. But evangelicals no longer seem certain about that keystone of faith. In Faith Alone, a Gold Medallion finalist and Evangelical Book Club main selection, R. C. Sproul discerns a softening of the doctrine of justification and explains why Christians must return to the biblical, Reformation view. He provides biblical evidence and theological reasons why Protestantism and Roman Catholicism divided in the first place, and why that division remains an uncrossed chasm. Now in paperback, Faith Alone offers a clear explanation of classic Protestant teaching on salvation, helping readers understand why this teaching is so important.

Dr. R.C. Sproul is founder and chairman of Ligonier Ministries, an international Christian education ministry located near Orlando, Fla. He is also co-pastor of Saint Andrew's Chapel in Sanford, Fla., chancellor of Reformation Bible College, and executive editor of Tabletalk magazine. He can be heard on the radio program Renewing Your Mind, which is broadcast on hundreds of radio outlets in the United States and around the world, and on RefNet Internet radio. Dr. Sproul has contributed dozens of articles to national evangelical publications, has spoken at conferences, churches, and schools around the world, and has written more than ninety books, including The Holiness of God, Faith Alone, and Everyone's a Theologian. He also serves as general editor of the Reformation Study Bible.

The main point of the book is that the Catholic and Reformation positions cannot be bridged. And if this doctrine was important enough to merit the council of Trent, that council's anathema must be removed before there can be any unity. Sproul does a wonderful job in documenting the two positions, and he does do a fair job describing the Catholic position. I still don't understand how people can read James and not see that James was railing against easy-believism. "Demons have faith." Obviously, James is not talking about the saving kind of faith. And frankly, I do not understand how you can read John, Ephesians, Romans, and Galatians and come up with the Catholic position. Catholicism has other doctrines that are in error, but this one can keep people under chains. Even if you are Catholic, this will at least explain the Reformed position to you and clear up some easy-believism misunderstandings. I really do not understand why people will give only one star if you disagree with the position. Like there was nothing else in the book that at least raised it to two stars. That's the way people rate things on Amazon. I mention this only to encourage any Catholic to at least see what the other side is saying, unfiltered through other mouths. Sproul is one of the premier theologians of our age, who studied under a premier theologian. He is worth your time.