The End Times Made Simple by Samuel Waldron (Paperback) 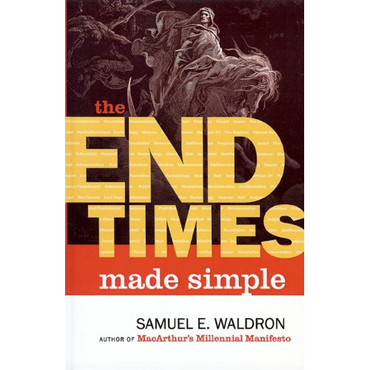 The End Times Made Simple by Samuel Waldron (Paperback)

Rapture? Pre-Trib? Post-Trib? Millennium? Confused? In today's Evangelical Christian world, eschatology - the study of the "Last Things" - has been turned into a sort of pseudo-science with a plethora of authors claiming to know exactly the scenario of events that are to take place just prior to the Lord Jesus Christ's return, as well as what the eternal state will be like. Often, these authors come to rather bizarre and unbiblical conclusions. Piece by piece, Samuel E. Waldron strips away years of false teaching and faulty exegesis thrust upon the church to reveal what the Bible, in its own simple but profound way, says about what will happen at the end of this present age.

Sam Waldron Samuel E. Waldron (born 1951) is a Reformed Baptist and professor of Systematic Theology at Midwest Center for Theological Studies (MCTS). In addition to teaching at MCTS, he is a pastor of Heritage Baptist Church in Owensboro, Kentucky. Waldron received a B.A. from Cornerstone University (1973), an M.Div. equivalency from Trinity Ministerial Academy, a Th.M. from Grand Rapids Theological Seminary (1987) and a Ph.D. from Southern Baptist Theological Seminary in 2005. From 1977 to 2001 he was a pastor of the Reformed Baptist Church of Grand Rapids.
Endorsement
Waldron's book is titled "The End Times Made Simple," and for the most part he demonstrates the truth of that title. I have to add the caveat that understanding the end times will never be as simple as many other biblical doctrines. However, in this book, Waldron shows that the end times don't have to be as hard to understand as we tend to make them.
He begins the book with some simple principles of interpretation that are very helpful. When reading the bible we should read the clear before the difficult, the literal before the figurative and the general before the detailed. Such simple advice will go miles in helping us understand prophecy. For the most part, people who want to understand the end times run straight to the books of Daniel and Revelation, two of the mmore difficult, figurative and detailed books in the bible. Although he didn't state it this way, one of the strengths of the amillennial position that Waldron espouses is its emphasis on interpreting the prophetic books in light of the rest of the bible, rather than the other way around. Waldron's three simple principles of interpretation help the reader do this. The bible is full of prophetic material, which, if read first will give the student of bible prophecy a trajetory for reading books like Daniel and Revelation.
From there, Waldron goes on to show the two-age view of world history and it is at this point that he shows the beautiful simplicity of God's prophetic plan. He spends a good deal of time describing this and comparing the various end-times views with this model. His exposition of Revelation 20 is a particular strength in this regard. In my opinion Waldron proves his case when he states that the amil view is the biblical view.
The latter part of the book answers many of the knotty questions surrounding prophecy such as the relationship of the church and Israel, the intermediate state, heaven, hell, eternal punishment and things like this. In doing this he covers most of the bases on issues that come up.
I am thankful for this book because it is scrupulously Biblical. It is unfortunate that those who hold the amil position are often dismissed in evangelical circles. Books like this one need to be widely circulated so that the church can see that the amil view (which is the dominant historic view of the church) is clearly taught in the Scriptures. That is not to say that there are no problems or issues that can't be debated. However, those who write amils off as "non-literalists" or as those who don't take the bible seriously will have to reconsider their view if they read books like this one.