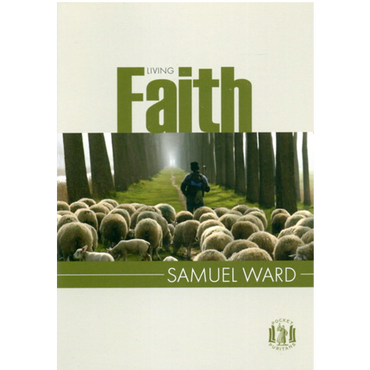 Samuel Ward explains the immense value of faith, not only as the gateway to salvation and life everlasting, but as the key to a joyful and triumphant life in this present world. In every sense Christians should be those who live by their faith. Adapted and paraphrased from The Sermons of Samuel Ward, by Richard Rushing.

Samuel Ward was born at Haverhill, in Suffolk, in the year 1577, and was eldest son of the Rev. John Ward, minister of the gospel in that town. He was admitted a scholar of St John s College, Cambridge, on Lady Margaret s foundation, on Lord Burghley's nomination, November 6, 1594, and went out B.A. of that house in 1596. He was appointed one of the first fellows of Sidney Sussex College in 1599,1 commenced M.A. 1600, vacated his fellowship on his marriage in 1604, and proceeded B.D. in 1607.
Endorsement
These little books are an excellent introduction to the in-depth spirituality of the Puritans(similar to Chapel Libraries -Large And Small Booklets,of Pensacola Florida)and the booklets of Inheritance Publishers-of Grand Rapids Michigan.Living Faith is adapted and paraphrased (by Richard Rushing)from the sermons of Samuel Ward(somewhat similar to the abridged versions of Christian Classics that Grace Publications has been doing for about the last twenty years or so).
If you have little or no exposure to the rich legacy that has been passed down to us through the writings of 'The Puritans' these miniature books will give you some idea of what you've been missing.You're doing yourself a great disservice if you don't avail yourself of the books,booklets and tracts by Puritan authors,that are in print from various publishers(the Banner Of Truth is the publisher of this book).
Here are a couple of pregnant quotes to whet your appetite for this spiritual gem on Faith:p.21"Let a man diligently and throughly make use of his faith and it will become great,and great will be the joy that it will bring to him."-an outstanding observation.walking by faith will bring happiness and contentment to God's children and the exercise of that faith will strengthen it. Unbelief and walking by sight(as opposed to wholly submitting to God's Word)will bring sorrow and regret. p.49"If all the complaints,grievances,wants and miseries of life are rightly weighed,the cause of them is either lack of faith or failure to practice faith."
The abundance of rich insights that Samuel Ward gives us reveal the heart of one who did not just know in theory what it is to live by faith in the Son of God but this was hammered out in his experience as well.
In Proverbs we are taught that 'he that walks with wise men shall be wise'. I challenge anybody to read some Puritan books and see if their understanding(with the Lord's blessing)of the Word of the living God does not increase.You will be eternally thankful that you did.