The Doctrine of Endless Punishment by William G.T. Shedd (Paperback) 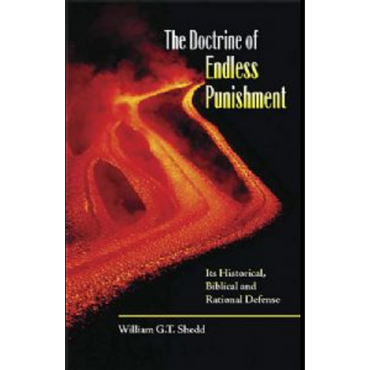 The Doctrine of Endless Punishment by William G.T. Shedd (Paperback)

W.G.T. Shedd (1820-1894) was both a congregational and, later, a presbyterian pastor. He had a distinguished career as a Professor of English Literature prior to his work at the theological seminaries of Auburn, Andover, and finally at Union Seminary, New York. He is best known for his three-volume Dogmatic Theology.

This doctrine is so solemn that man's natural instinct is either to ignore it or deny it. From time to time in the history of the Christian church it comes under concerted attack, as it did during the life of W.G.T. Shedd, the noted nineteenth century theologian and preacher. In this work, Shedd carefully expounds the biblical teaching on divine judgment, and sets it in the context of the history of Christian doctrine. He deals carefully and cogently with objections to it. Shedd shows that 'The strongest support of the doctrine of endless punishment is the teaching of Christ, the Redeemer of man; without the explicit and reiterated statements of God incarnate, it is doubtful whether so awful a truth would have had such a conspicuous place as it always has had in the creed of Christendom. Christ could not have warned men so frequently and earnestly as he did, had he known there is no future peril.' This book will have a profoundly sobering effect on its readers; but its lasting impression will be to cause a new concern for men and women without Christ, and undying gratitude for 'Jesus, who delivers us from the wrath to come'.

WGT Shedd was the last Calvinist theology instructor at Union Seminary in New York. Along with his Dogmatic Theology, this particular work is Shedd's most enduring contribution to Christian theology.
This book attempts to reiterate and argue in favor of the historic Christian doctrine of the reality of a literal hell and that it is a place of endless punishment for those who reject Christ. In arguing for this, Shedd seeks to present both a biblical argument and a rational argument. As I will discuss below, his former attempt is better then his latter attempt.
In his biblical argument for the doctrine of hell, Shedd pursues two main lines of contention - whether hell in fact exists, and is it in fact a place of eternal punishment. It is here that Shedd provides much needed analysis of what is meant by the Old Testament Hebrew word 'sheol' as well as the New Testament Greek word 'hades', both of which are terms where confusion and speculation tend to dominate in much modern preaching on hell. It is also here where Shedd takes on the whole question of whether Jesus descended into hell or not after His crucifixion, which is an assertion that has periodically populated the realm of Christian theology, particularly among certain charismatic strains of thought.
The other main strength of this book is his analysis of the kind of punishment that hell's occupants will endure. Shedd presents a compelling, and in my mind conclusive argument in favor of the doctrine of endless punishment against alternative views such as annihilationism and certainly universalism. With prominent evangelicals like John Stott flirting heavily with annihilationism in recent decades, Shedd's antidote is most welcome and should be read carefully by all those who are seeking a sober treatment of what Scripture actually says about this subject.
When the reader begins to read Shedd's rational argument, they will notice that Shedd falters a little bit. As has been pointed out by others, Shedd appeared to hold to a view of human ability which was ultimately internally inconsistent with his theology. Shedd appeared to hold to a view of free will that goes against mainstream Calvinism and the Reformation (and in my opinion the Bible as well), believing that man's 'free will' in a libertarian sense is an intricate component of why there is a hell and why people end up there. As is the case with many Christians who assert the reality of a kind of libertarian free will, Shedd simply presumes it rather than proves it through Biblical exegesis, and this is a notable weakness in his argument since Shedd appears to take this basic extrabiblical and unproven imperative and makes it a centerpiece of his rational argument. It is here that the discerning reader will hopefully be more careful about presenting a rational argument for hell then Shedd was in terms of Biblical fidelity.
But in the end, while his rational argument is questionable, his Biblical argument is classic, and in the end, that is the most important criteria, hence the 5 stars I'm giving the book. The doctrine of hell has never been liked, it has never been appealing even to those who affirm its truthfulness. It's a difficult doctrine, it always will be. That is why it is especially important in this area, where our emotions and our feelings are least willing to accept such a doctrine, that we must submit to Scriptural authority. And as Shedd eloquently demonstrates, the traditional doctrine of hell is the theology that does the most justice and most clearly affirms what the Bible repeatedly teaches about this scary doctrine. Shedd's biblical argument is must reading.