The Doctrine of Justification by James Buchanan (Paperback) 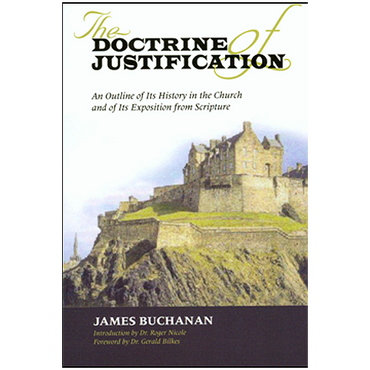 The Doctrine of Justification by James Buchanan (Paperback)

James Buchanan (1804-1870) was born in Scotland in 1804 and ordained in 1827 in the Church of Scotland. In 1828 he commenced a very successful ministry at North Leith where he gained a great reputation as an earnest, eloquent, evangelical preacher. In 1845 he was appointed to the Chair of Apologetics at New College, Edinburgh, and in 1847 he succeeded Thomas Chalmers as Professor of Systematic Theology. He retired in 1868 and died two years later. Buchanan was a prolific and popular writer: his first book, Comfort in Affliction (1837), sold nearly 30,000 copies. His two most valuable works were The Office and Work of the Holy Spirit (1842), an exposition which still merits study, and The Doctrine of Justification, the Cunningham Lectures for 1866, reprinted here.

James Buchanan’s The Doctrine of Justification is “the” classic work on this cardinal doctrine. Buchanan lucidly covers the historical development of the doctrine through the Old Testament, the apostolic age, the scholastic divines, the Reformation and Counter Reformation, and in the Church of England. He expounds the doctrine itself by covering the scriptural meaning of the term, its relation to the law and justice of God, its relation to the mediatorial work of Christ, its relation to grace and works, and more. Throughout, Buchanan systematizes the doctrine of justification in an orthodox Reformed manner that is fully reliable, consistent with all the doctrines of grace, and still relevant to the burning issues of our day, such as the New Perspective. An introduction by Dr. Gerald Bilkes on the New Perspective is also a great help. Endorsements "The doctrine of justification by faith is like Atlas: it bears a world on its shoulders, the entire evangelical knowledge of saving grace ... This is still the best text book on the subject, from the standpoint of the classic covenant theology." - J. I. Packer

If you read one book on justification and the imputed righteousness of God in Christ; read this one, then read Owen's Doctrine of Justification. Buchanan's book is 'easier' to read than Owen's for the use of the English. He brings you through how the OT spoke of Justification and how the Apostles taught it in the NT, how the early church understood it and all along the way - the way justification was misconstrued until today. There is nothing new under the sun; even the doctrinal errors of justification. If you want to understand the depths of what and how God does justify the ungodly and still be just - read this book before all others. To God, and God alone, be the glory.