The Church of Christ by James Bannerman 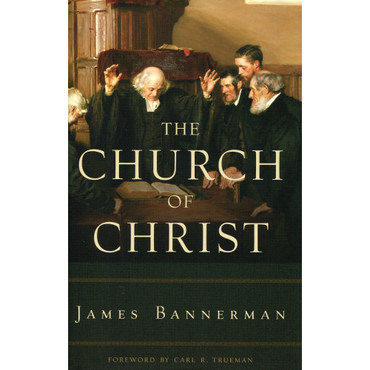 The Church of Christ by James Bannerman

The New Testament places the church at the centre of its practical vision of the Christian life and at the heart of the Great Commission. A church-less Christianity is no real Christianity at all.

As we head into a world very similar to Paul’s own context, in which pluralism dominates and Christianity is regarded with intellectual and moral suspicion, it is vital that Christians have a clear understanding of what the church actually is.

James Bannerman’s The Church of Christ is one of the key historic texts of the doctrine of the church. Few will agree with everything the author has to say, but as Carl Trueman states in his foreword, ‘the great thing about the book is that it will stimulate the reader to reflect on the nature of the church in a profoundly biblical and historically sensitive way’.

After dealing with basic principles and distinctions, such as the contrast between the visible and invisible church, and between the local and universal church, Bannerman takes up the important and far-reaching question of the relation between church and state. But the body of the work is really a treatise on church power—the nature, limits and exercise of Christ’s power in the church in its connexional and local aspects. In what does the ordained ministry consist? Should the church micro-manage the lives of her members? To what extent should the church campaign for wider political or social causes? Is the church to be an agent for the transformation of society as a whole? What tools does the church have for making disciples and, if necessary, disciplining them? Answers to these questions can only come from a correct understanding of the nature of the church’s power.

Although Presbyterian in conviction, the author has undertaken a ‘comparative’ study of the various classic positions on each issue under consideration as these are expressed in the confessional symbols and standard authors. It is this method which makes the book so useful for all serious-minded readers. The appendix also contains valuable bibliographical material.

This is classic Scottish theology at its best, and those who take the time to digest it will be richly rewarded.

James Bannerman (1807-68), was a Free Church divine. Born at Cargill, Perthshire, where his father, Rev. James Patrick Bannerman was minister, he studied arts at Edinburgh University 1822-6 and then theology until 1830, when he was licensed by the Church of Scotland Presbytery of Perth. He was ordained to Ormiston, Midlothian, in 1833.

He played a leading role in the Ten Years’ Conﬂict, acting as convener of the General Assembly’s Special Commission dealing with the supply of religious ordinances in Strathbogie. Joining the Free Church at the Disruption (1843), in 1849 he was appointed Professor of Apologetics and Pastoral Theology in New College, Edinburgh, a position he held until his death.

Bannerman produced several valuable works. The best-known is his 2-volume The Church of Christ (published in 1868; reprinted by the Trust, 1960 and 1974), an elaborate exposition of Presbyterian ecclesiology which has had considerable inﬂuence and has been reprinted several times. His Inspiration (1865) is a magisterial presentation of the concept of the plenary verbal inspiration of Scripture. His publications include various pamphlets relating to the controversies of the period, including the Disruption and the proposed Union with the United Presbyterian Church, which he favoured. Bannerman received a DD from Princeton, New Jersey, in 1850. Together with James Buchanan, he edited four volumes of the writings of William Cunningham for the press.

‘I am thrilled to see this classic work on Presbyterian polity being reissued. And if you think “thrilled” and “Presbyterian polity” don’t belong in the same sentence, that’s just one more reason we need Bannerman’s book. In a day where the doctrine of the church is often thought obscure, irrelevant, and even divisive, Bannerman reminds us just how much our forefathers thought about this topic and just how much the Bible has to say on these issues. This big book on the nature and order of the church is more helpful, more contemporary, and more important than you might think.’ — KEVIN DEYOUNG

‘The great thing about Bannerman’s The Church of Christ is that it will stimulate the reader to reflect on the nature of the church in a profoundly biblical and historically sensitive way. At a point in history when the church in the West is finding herself for the first time in 1,500 years to be marginal and often unwelcome, clear thinking on the nature and purpose of the church is vital. I do not think there is a better way to sharpen one’s thinking on these matters than thoughtful and deep refection upon this work of James Bannerman.’ — CARL R. TRUEMAN