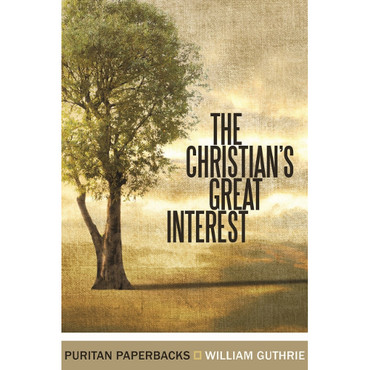 William Guthrie, one of the holiest and ablest of the experimental divines of Scotland, was born at Pitforthy, Angus, the seat of his ancestors, in the year 1620. He was the eldest son of the family, and his superior genius was displayed in his early and successful attention to learning; but till his entrance into college life, he did not obtain that intimate and saving acquaintance with Divine truth which enabled him at once to stay his own soul upon God as the God of his salvation, and to prescribe most skilfully for the cases of spiritual disease that came under his notice.

In 1654 Guthrie served as Moderator of the Protestor Synod of Glasgow and Ayr. Ere long he published The Christian's Great Interest. This work has gone through numerous editions, been translated into various languages, and continues to embalm his memory in the estimation of intelligent Christians of every name.

All of Guthrie's teaching and pastoral experience were poured into this work - his only book. The remarkable fact that is has gone through more than eighty editions and been translated into several languages testifies to its value. This book describes in a clear and attractive style what it means to be a Christian, and how to become one. Its author William Guthrie was described by John Owen as 'one of the greatest divines that ever wrote'."

‘One of the greatest divines that ever wrote.’ — JOHN OWEN

‘It has long been the favourite work of our peasantry in Scotland. One admirable property of [The Christian’s Great Interest] is that, while it guides, it purifies.’ — THOMAS CHALMERS