The Canon of Scripture by F.F. Bruce (Hardcover) 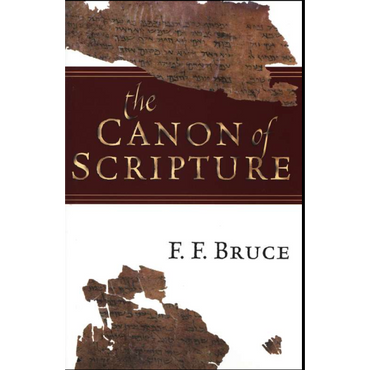 The Canon of Scripture by F.F. Bruce (Hardcover)

F. F. Bruce (1910-1990) was Rylands Professor of Biblical Criticism and Exegesis at the University of Manchester in England. During his distinguished career, he wrote more than forty bestselling commentaries and books, including several titles published by InterVarsity Press, A Mind for What Matters and Paul, Apostle of the Heart Set Free. He also served as general editor of The New International Commentary on the New Testament.

How did the books of the Bible come to be recognized as Holy Scripture? Who decided what shape the canon should take? What criteria influenced these decisions? After nearly nineteen centuries the canon of Scripture still remains an issue of debate. Protestants, Catholics and the Orthodox all have slightly differing collections of documents in their Bibles. Martin Luther, one of the early leaders of the Reformation, questioned the inclusion of the book of James in the canon. And many Christians today, while confessing the authority of all of Scripture, tend to rely on only a few books and particular themes while ignoring the rest. Scholars have raised many other questions as well. Research into second-century Gnostic texts have led some to argue that politics played a significant role in the formation of the Christian canon. Assessing the influence of ancient communities and a variety of disputes on the final shaping of the canon call for ongoing study. In this significant historical study, F. F. Bruce brings the wisdom of a lifetime of reflection and biblical interpretation to bear in answering the questions and clearing away the confusion surrounding the Christian canon of Scripture. Adept in both Old and New Testament studies, he brings a rare comprehensive perspective to his task. Though some issues have shifted since the original publication of this book, it still remains a significant landmark and touchstone for further studies.

FF Bruce does a great job of explaining how the books of the Bible were canonized. I was surprised to learn how many people had different opinions on which books should be canonized. Many people had mized feelings about the book of Revelation because of it being a difficult book to understand. Others felt that James should not be included because it only mentions the name of Jesus twice. Similarly, the books of esther and Song of Songs in the Old Testament barely made it in.
And right up to the present day, there are those who feel that the Apocrypha should be included in the canon of Scripture, and the Roman Catholic church regards them as such today.
Bruce takes the time to discuss individual theologians such as Jerome, Origen, Tertullian, Augustine, Clement of Alexandria, Irenaeus, Athanasius, and many others and whenever possible, he furnishes their choices for books whoch were deemed fit for the canon of Scripture. Apparently, Athansius' trip to Rome in 350 AD was decisive for helping the western church decide on the 27 books of the New Testament that we now have today. Before this, they were hedging on Hebrews, 1 Peter, 2 Peter, Revelation, James and 2 and 3 John.
The book concludes with a couple of the author's lectures on the subect of the secret gospel of Mark (which he rejects) and the difference between the plenary meaning of scripture and the meaning in context.