The Bondage of the Will by Martin Luther (Paperback) 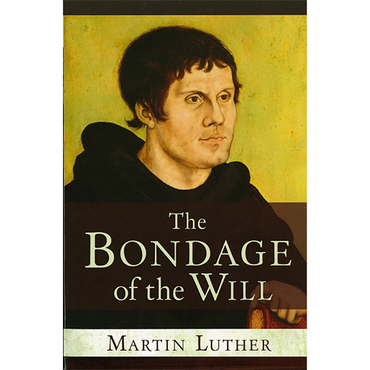 The Bondage of the Will by Martin Luther (Paperback)

First published in 1525, Martin Luther’s Bondage of the Will is acknowledged by theologians as one of the great masterpieces of the Reformation. It is Luther response to Desiderius Erasmus’ Diatribe on Free Will, written in his direct and unique style, combining deep spirituality with humor. Luther writes powerfully about man’s depravity and God’s sovereignty. The crucial issue for Luther concerned what ability free will has, and to what degree it is subject to God’s sovereignty. For Luther, this key issue of free will is directly connected to God’s plan of salvation. Is man able to save himself, or is his salvation entirely a work of divine grace? This work is vital to understanding the primary doctrines of the Reformation and will long remain among the great theological classics of Christian history.

Martin Luther (1483-1546) initiated the Protestant Reformation. As a priest and theology professor, he confronted indulgence salesman Johann Tetzel with his The Ninety-Five Theses in 1517. Luther strongly disputed their claim that freedom from God's punishment of sin could be purchased with money. His refusal to retract all of his writings at the demand of Pope Leo X in 1520 and the Holy Roman Emperor Charles V at the Edict of Worms meeting in 1521 resulted in his excommunication by the pope and condemnation as an outlaw by the emperor. Martin Luther taught that salvation is not from good works, but a free gift of God, received only by grace through faith in Jesus as redeemer from sin. His theology challenged the authority of the pope of the Roman Catholic Church by teaching that the Bible is the only source of divinely revealed knowledge and opposed sacerdotalism by considering all baptised Christians to be a holy priesthood. Those who identify with Luther's teachings are called Lutherans. His translation of the Bible into the language of the people (instead of Latin) made it more accessible, causing a tremendous impact on the church and on German culture. It fostered the development of a standard version of the German language, added several principles to the art of translation, and influenced the translation into English of the King James Bible. His hymns inspired the development of singing in churches. His marriage to Katharina von Bora set a model for the practice of clerical marriage, allowing Protestant priests to marry.

There are few books which written over 400 years ago are still applicable today; Martin Luther's masterpiece, The Boncage of the Will, is one of those books. Anyone desiring to know more about the root of dissent between Luther and the Catholic Church must read this book.
In his treatise Luther systematically demolishes Erasmus' arguments in favor of free-will. Luther brilliantly illustrates why the will is in total and complete bondage and enslavement to sin, and why free-will is a completely meaningless term. Luther argues that the only thing the will is free to do is to sin and rebel against God.
Luther shows that salvation is totally dependent on the grace of God and His sovereign Will. To say that even a small part of the human will can prepare itself to receive God's grace is an utterly ludricous sentiment. Erasmus believes that a human being by a very small effort can earn God's grace. Luther totally destroys this view and shows that to espouse such a view makes one worse than the Pelagians, who held that it took numerous great works to earn God's grace.
This book is as applicable today as it was when Luther first wrote this book. When so many Protestant Churches hold to a soteriological view more akin to that of Erasmus, it is absolutely vital that the truth of the Reformation be brought back into the spotlight. Read this book to gain a greater understanding of the major area of disagreement among the Reformers and the Catholic Church of the time, and also to understand that our salvation is not predicated on any meritorious work that we accomplish, but simply on the grace of God.