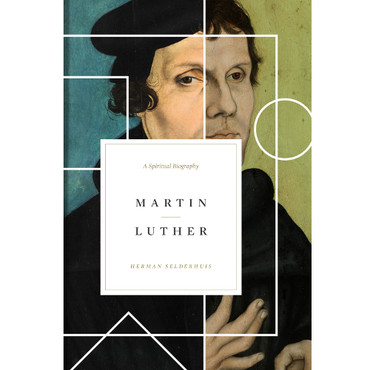 Famous for setting in motion the Protestant Reformation, Martin Luther is often lifted high as a hero or condemned as a rebel. But underneath it all, he was a man of flesh and blood, with a deep longing to live for God.

This biography by respected Reformation scholar Herman Selderhuis captures Luther in his original context and follows him on his spiritual journey, from childhood through the Reformation to his influential later years. Combining Luther’s own words with engaging narrative designed to draw the reader into Luther’s world, this spiritual biography brings to life the complex and dynamic personality that forever changed the history of the church.

Herman Selderhuis is professor of church history at the Theological University Apeldoorn in the Netherlands and director of Refo500, the international platform focused on raising awareness for projects related to the legacy of the Reformation. He also serves as the director of the Reformation Research Consortium, president of the International Calvin Congress, and curator of research at the John A. Lasco Library in Emden, Germany. He is the author or editor of several books, including John Calvin: A Pilgrim’s Life.

“Herman Selderhuis gives a well-organized, source-based short account of Luther’s life, putting him into his context. Written by one of the most respected international scholars in Reformation history, this book may be fruitfully used as an introduction to Luther’s life.”
Volker Leppin, theologian and professor of church history, Eberhard Karls University of Tübingen; president, Interdisciplinary Medieval Association

“With a keen eye for the details that make Luther come alive for twenty-first-century readers, and with an ear for those often-false rumors spread by other scholars about the man, Selderhuis guides us through the life of the Wittenberg professor, depicting his genius and his temperament within the context of his time and its challenges. This well-balanced journey at the reformer’s side provides readers with insights into the development of his thought and his path toward prominence and influence that shaped the last quarter century of his life. The often-slighted later years, in which his writings and personality created a sphere of influence equaled by few in any age, are here given due attention, with helpful explanations of the setting in which Luther’s reform movement matured.”
Robert Kolb, international research emeritus professor, Institute for Mission Studies, Concordia Seminary; author, Martin Luther: Confessor of the Faith; coauthor, The Genius of Luther’s Theology

“The complexity of Luther is staggering, but Herman Selderhuis has given us a detailed portrait of the reformer that captures both his blemishes and the beauty of his faith in Christ. This book is a fascinating read about one of the most significant figures of history. Both students of Christian history and admirers of Reformation theology will find it helpful.”
Joel R. Beeke, President, Puritan Reformed Theological Seminary; Pastor, Heritage Reformed Church, Grand Rapids

“There have been more books written about Martin Luther than any other figure in the last millennium of church history. With such a Luther-glutted market, what more could possibly be said about him? Well, this latest volume from the hand of the gifted Reformation scholar Herman Selderhuis does indeed give us a fresh perspective on the German reformer. With his own translations of Luther’s writings and his comprehensive knowledge of Luther’s world, both theological and social, this new biography is both deeply instructive about the things that mattered most to Luther and a delight to read. This is how biography should be written!”
Michael A. G. Haykin, professor of church history and biblical spirituality, The Southern Baptist Theological Seminary

“Among the many new biographies of Martin Luther, this one stands out for its fresh engagement with Luther’s own assessment of his life and work. Well researched and engagingly presented.”
Timothy George, founding dean, Beeson Divinity School; general editor, Reformation Commentary on Scripture

“What makes this Luther biography distinct is its explicit attention to Martin Luther’s spiritual journey as a sixteenth-century person haunted by his demons and driven by his passions, and the way it presents Luther’s own voice and reflection throughout, paired with a restrained but poignant analysis that invites the reader to dig deeper. Luther is introduced as a ‘problem’ in his church context with evolving roles in which he is shaped by his relationships. He is assessed as a ‘unique phenomenon’ on the one hand, while as a flesh-and-blood human being with a temperament, strong emotions, and tragic ailments on the other. Selderhuis’s clearly written and immediately engaging narrative, with wit, offers an abundance of detail and apparatus for the reader to understand one of the most fascinating personalities in Christian history and the complexities of his Reformation hermeneutics.”
Kirsi Stjerna, First Lutheran, Los Angeles / Southwest Synod Professor of Lutheran History and Theology, Pacific Lutheran Theological Seminary; author, Women and the Reformation

“This richly illustrated and succinctly written book, based on anything but superficial knowledge, is very much a life of Luther for everyone. While announcing itself as a ‘spiritual biography,’ it actually presents Luther in body and soul in his day-to-day contexts. Selderhuis catches very well Luther as a reformer stumbling daily from one unconcealed existential crisis to another, often beset with spiritual, mental, religious, family, political, physical, and personality problems. Here we have the real Luther—potent prophet of God, astonishing theologian, prolific writer, and phenomenal communicator indeed, but also a flawed genius whose attributes included buffoonery, vulgarity, vindictiveness, and downright rudeness. While many have viewed the reformer as a Hercules of the faith and the thirteenth apostle, this book reminds us that Luther was also no saint and that he had no pretensions to be one.”
W. Ian P. Hazlett, honorary professorial research fellow, University of Glasgow; editor in chief, Reformation and Renaissance Review; author, The Reformation in Britain and Ireland; coauthor, A Useable Past

“At this half-millennium anniversary of the birth of the Protestant faith, there is scarcely a better place to (re)discover Martin Luther than in this fresh biography by internationally recognized Reformation scholar Herman Selderhuis. Here is where to start your investigation of an amazing man whose remarkable courage, controversial ministry, and persuasive writings changed the world—for good and for ill. Don’t miss reading this fascinating, fun, and poignant foray into the spiritual life and tumultuous times of the one who, as Calvin described, ‘gave the Gospel back to us.’”
Peter Lillback, president and professor of historical theology and church history, Westminster Theological Seminary

“Martin Luther: A Spiritual Biography offers a new and fascinating approach to Luther’s life. In this book, political and theological contexts are paid attention to, but priority is given to the story of Luther’s religious life, from childhood to old age. The account is based on an extensive use of primary sources—not least Luther’s letters and Table Talk—and the reformer’s own words are frequently quoted. At the same time, the interpretation of Luther’s texts is closely related to specific places and concrete situations in his life. In this way, the reader is brought closer to Luther’s person than what is often the case in other biographies.”
Tarald Rasmussen, professor of general church history and research director, University of Oslo; editor, Teologisk Tidsskrift

“Herman Selderhuis is a fine scholar but also a churchman and a teacher. Thus, he writes with an enviable, conversational ease, which makes his teaching accessible to the nonspecialist audience. In this brief biography of Martin Luther, he brings the reformer alive, from his birth in humble circumstances to his death as the most (in)famous man in Europe. Those who have never encountered the narrative of Luther’s life before will find this an accessible and satisfying introduction that wears its learning lightly and points to the deep truths to which Luther’s life and thought testified.”
Carl R. Trueman, Paul Woolley Chair of Church History and professor of church history, Westminster Theological Seminary; author, The Creedal Imperative and Luther on the Christian Life