The Apostles' Doctrine of the Atonement by George Smeaton (Hardcover) 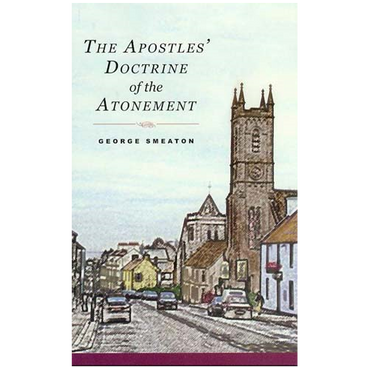 The Apostles' Doctrine of the Atonement by George Smeaton (Hardcover)

Born in Berwickshire, George Smeaton (1814-89) studied at Edinburgh University and was ordained to the ministry of the Church of Scotland at Falkland in Fife in 1839. He was among those hundreds of ministers who came out at the Disruption in 1843 to form the Free Church of Scotland, and later that year was inducted to Auchterarder Free Church. He was appointed to the Chair of Divinity at the Free Church College in Aberdeen in 1853, and in 1857 became Professor of New Testament Exegesis at New College, Edinburgh, holding this post until his death in 1889.

What is the significance of the coming of Christ and his death on the cross? This question, so central to the Christian faith, has been answered in a wide variety of ways. Theologians today frequently ask how the cross of Christ can be interpreted in categories relevant to modern man. By contrast, George Smeaton rightly believed that the only reliable way to understand the death of Christ was by the careful and systematic exposition of the relevant passages in the New Testament. The result is this fine volume in which we are given careful studies of such passages as 2 Corinthians 5 where Paul expounds the death of Christ as a work of reconciliation, and Galatians 3:13 which speaks of Christ bearing the divine curse, as well as many other texts. The fruit of Smeaton's faithful use of his exceptional gifts as a theologian and exegete, The Apostles' Doctrine of the Atonement is a marvellous study which serves as both a doctrinal treatise on the atonement and a commentary on many of the most important passages in the New Testament.

These books are reliable, but they are also wonderfully readable. Ministers at every age and stage will benefit from them, and be led by them through careful, biblical, spiritual exposition of the cross. They combine biblical exegesis, doctrinal exposition, spiritual meditation, depth without dense style, clarity without technical clutter."