Tearing Down Strongholds And Defending the Truth 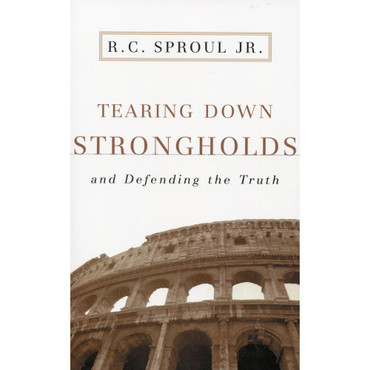 Tearing Down Strongholds And Defending the Truth

R. C. Sproul Jr. equips Christians with ammunition to counter the non-Christian philosophies that have made the greatest gains in our era... and primary criticisms leveled against the biblical worldview.

Bulldozing "worldly nonsense" with biblical wisdom, Sproul's seasoned insight equips you with the necessary tools for opposing the non-Christian philosophies of our age. Tearing Down Strongholds reminds us that, as Paul put it, Christians are at war. Writing for both believers and non-believers, R.C. Sproul, Jr., does three things. He shows how each major non-Christian worldview is self-contradictory and thus self-refuting. He answers the criticisms leveled against Christianity, and he makes a positive case for the existence of God. He seeks not merely to expose falsehoods but to highlight the firm foundation on which our faith is built.

R. C. Sproul Jr. (MA, Reformed Theological Seminary, Orlando; DMin, Whitefield Theological Seminary) is a pastor at St. Peter Presbyterian Church, Bristol, Tennessee, and director of the Highlands Study Center, Meadowview, Virginia. He is also editor-in-chief of Every Thought Captive. Sproul has authored several books including Tearing Down Strongholds, Almighty Over All, Playing God, and Eternity in Our Hearts. He also writes a regular column for Homeschooling Today magazine. R. C. and his wife, Denise, have six children.