Searching Our Hearts in Difficult Times 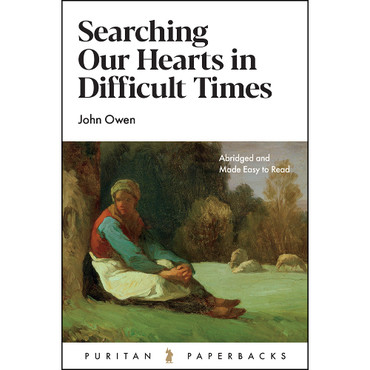 Searching Our Hearts in Difficult Times

‘O that we might advise one another as to what to do; to help one another to recover from our weaknesses!’

Following Jesus is not easy. It involves self-denial, daily cross-bearing, and lifelong obedience. Salvation is promised to the one who ‘endures to the end.’ Christians need much encouragement, especially in ‘difficult times’. This the Lord supplies through pastors who love him and care for his people.

John Owen was such a pastor. One way he sought to help his fellow-believers was to hold occasional meetings for spiritual conference and fellowship at which various topics were addressed and discussed, with Owen providing a concluding summary of the proceedings.

The short chapters in Searching Our Hearts in Difficult Times contain a number of Owen’s talks and sermons on a wide range of subjects which are as relevant to Christians today as they were to believers some three and a half centuries ago.

Abridged and made easy to read.

This greatest of all British theologians was incredibly prolific as a writer, with John Owen’s books numbering in the dozens. He was a man of great stature with national influence during his lifetime, preaching before Parliament multiple times and serving as chaplain and advisor to Oliver Cromwell. He also enjoyed some influence with King Charles II. He is best known, though, for his writings that cover subjects ranging from doctrinal explorations to ecclesiastical themes to practical advice. No matter the topic, it was thoroughly explored and presented with authority—and, although he often wrote books to help decipher troubling current issues, they are presented in a way that is timeless.