Why are you here?: Searching for the Meaning of Life 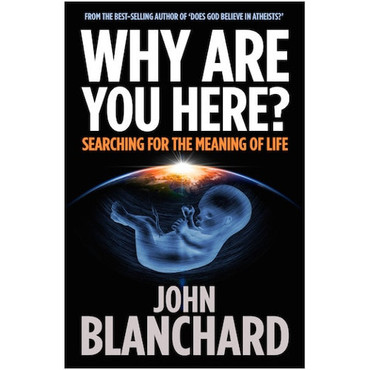 Why are you here?: Searching for the Meaning of Life

It’s one thing to have Ultimate Questions or something similar to freely hand out to anyone, but what do you give to the thinking, serious person who is wrestling with the Christian faith and its relationship to the meaning of life? John Blanchard provides the answers in this new book, written for Christians to give to enquirers. Dr Blanchard deals with the scientific and philosophical issues in his inimitable style, leading at the heart of the book to a full-orbed presentation of the glories of the gospel. Professor Sinclair Ferguson says: You can trust John Blanchard. In addition to the sheer clarity of what he writes, he is honest and he is gracious. At no point will you find yourself asking, ‘What is he trying to say!’ Nothing here is dull, merely ordinary or interesting. He has that special gift if being insatiably curious about things, and – this is his genius – he always seems to be asking if and how and why things happen. Why are you here? will help you to connect the dots so that the big picture,although composed of seemingly endless millions of facts, really does begin to make sense.

John Blanchard is an internationally- known author, evangelist and Christian apologist. Some eighteen million copies of his publications are in print in over sixty languages.