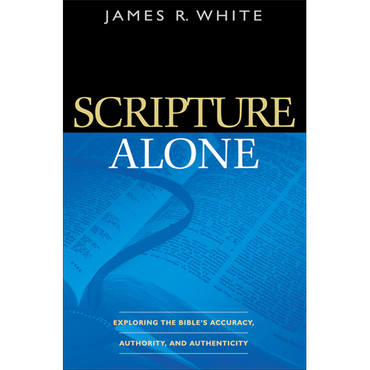 A Passionate Introduction to the Sufficiency of the Bible "If God's Word is to be heard, we who love it must stand in its defense," says James R. White in his introduction to Scripture Alone. With clear teaching in an engaging, accessible style, this book lays a foundation for all Christians who desire a deeper understanding of biblical sufficiency. White presents Scripture as God-breathed in nature, as unparalleled and absolute in authority, and as the church's infallible rule of faith in straightforward language to help believers apply these doctrines to their lives. In addition he addresses the timely issues of the canon, including textual and historical evidence. The captivating dialogues used throughout the book help bring into focus the great truths of faith against the backdrop of error. Based on the author's experience in public debates against leading apologists of varying ideology, they assist readers in discovering how to engage in conversation with those of differing beliefs. "The Word comes first, and with the Word the Spirit breathes upon my heart so that I believe." --Martin Luther

James R. White is the author of several acclaimed books, including The God Who Justifies and The Forgotten Trinity. The director of Alpha and Omega Ministries, he is an accomplished debater of Muslim apologists and an elder of the Phoenix Reformed Baptist
Endorsement
James White is a Reformed apologist who specializes in defending the faith against the doctrines of Roman Catholics and Mormons - two groups which deny the doctrine of sola scriptura or Scripture Alone. He is uniquely qualified to write such a book as he is intimately familiar with the arguments against the Bible's sufficiency. The book comes at a time when much of Protestantism has lost sight of this doctrine and has been slowly denying it. White defines this doctrine as "Scripture alone as the sole infallible rule of faith for the church." Thus he teaches that Scripture has been given to govern and guide what we believe and why we believe it and is the only guide that can do so infallibly. He has written this book to "lay a foundation for all Christians who desire a deeper understanding of biblical sufficiency" (from the back cover). The book is targeted not at theologians and apologists, but at laypeople who are interested in being able to defend their faith and have firm convictions regarding the Scriptures.

The book explores the themes of the Bible's accuracy, authority and authenticity. Interestingly, much of the book takes the form of dialogues between a Protestant believer and a Catholic or Mormon apologist. That should go to prove that this book is not targeted at intellectuals and theologians, though I have little doubt White has the knowledge to write such a book. I found the dialogues a very helpful way of explaining difficult issues in a "could happen" type of environment. While the dialogue itself is sometimes almost comical (when was the last time you spoke to someone on the subway and said "Ever considered that the primitive Christian church was hardly in a position to be chasing down copies of pseudepigraphical gospels penned by their enemies?") the content is helpful. I may not use "pseudepigraphical" in conversation, but I can certainly apply the content of that conversation to someone who believes that The Da Vinci Code is a legitimate historical work.

Among the issues White discusses are: the nature of God's Word, Inerrancy and exegesis, the canon of Scripture, apocryphal books, corruption and contradiction and scriptural sufficiency. He also includes a short section on "the Lord spoke to me" where he shows how people who believe God continues to speak to them apart from Scripture deny scriptural sufficiency. While none of the topics is covered in great detail, they all receive enough attention to explain what they are and how they relate to the defense of sola scriptura. There were not any chapters that became bogged down in detail and theological nuances - they were all straightforward and easy to read.

White has written a passionate introduction to the doctrine of the Bible's sufficiency. This is a book that any Christian, even one with little theological background, should be able to read and enjoy. The doctrines of sola scriptura are under attack from both outside the church and within. As believers we must arm ourselves with the knowledge of the issues and the ability to defend these issues which are of foundational importance to the continuance of the faith. I recommend this book as an excellent introduction to biblical sufficiency.