Is the Mormon My Brother? by James R. White (Paperback) 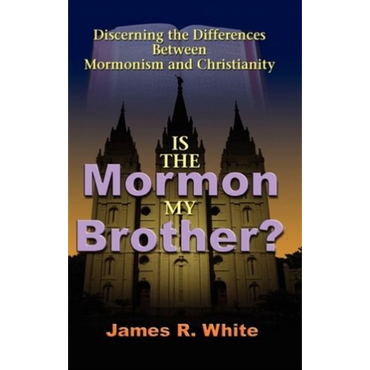 Is the Mormon My Brother? by James R. White (Paperback)

James R. White is the author of the popular The King James Only Controversy, The Roman Catholic Controversy, and Grieving: God's Path Back to Peace. He is the director of ministries for Alpha and Omega Ministries, a Christian apologetics ministry, and scholar-in-residence at Grand Canyon University. He holds an M.A. from Fuller Theological Seminary. He and his wife have two children and live in Arizona. --This text refers to an out of print or unavailable edition of this title.

"James White is a careful thinker and a tenacious defender of orthodox, biblical Christianity. His book clearly shows why the Mormon religion is incompatible with Christianity. The divide is very wide indeed." - Kenneth R. Samples, Director - Augustine Fellowship Study Center "The is one of the most illuminating updates on the current state of Mormonism that I have ever seen. It brings Mormonism's unstable, changeable truth clearly into view, and provides a convincing warning against the most polytheistic religion ever offered to the modern world." - Dr. Gleason Archer, Professor of Old Testament and Semitics at Trinity Evangelical Divinity School "A Straightforward, Accurate Answer to a Question Once Considered Settled! In Television campaigns, parachurch events, and clergy fellowships all across the United States, Mormons are presenting themselves as mainstream Christians. Is it unloving or backward to say they aren't real Christians? In contrast to Christian monotheism the belief in one God, Mormonism teaches that God was once a man who lived on another planet and was exalted to the status of God, and that Mormon men can also become gods upon death and resurrection. Is the Mormon My Brother? Shows how this fact alone means Mormons and Christians are irreconcilably at odds at faith's most basic level. In recent years Mormon apologists and church leaders have waged an unflagging public relations campaign to try to rid themselves of the stigma of being considered a "cult" in the evangelical community -. James White demonstrates in a peaceable yet conclusive way that the divide between Mormonism and true Christianity remains an impassible gulf." - Dr. John MacArthur, Senior Pastor, Grace Community Church "The first act of love in reaching out to Mormons is to demonstrate that we do not worship the same God. In 'Is the Mormon My Brother?' James White powerfully drives home that message." - Hank Hanegraaff, President, Christian Research Institute.

This book asks a question and then answers it with facts from the bible which Christians exclusively use versus facts from the more evolved books than the bible which the Mormons exclusively use such as the Doctrine and Covenants, Book of Abraham, Book of Mormon, etc. The book follows a question and answer format like the one used below but the book goes into that and more reasons why Mormons are not Christians. This book is awesome.