Sacred Dissertations on the Lord's Prayer by Herman Witsius 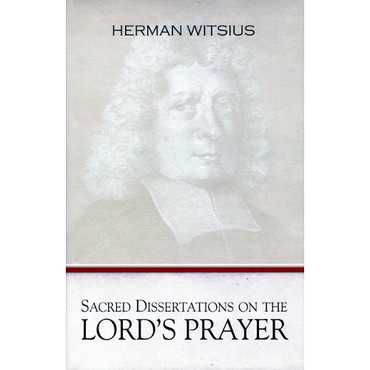 Sacred Dissertations on the Lord's Prayer by Herman Witsius

This volume contains more than the title reveals. Prefaced to a 230-page exposition of the Lord’s Prayer, Witsius devotes six chapters to the subject of prayer in general, which he calls the pulse of the renewed soul. His exposition on the Lord’s Prayer is itself a masterpiece. In many instances, the questions grappled with receive greater scriptural and practical clarity from Witsius’ pen than from anything else written to date. Sound biblical exegesis and practical doctrinal substance, this book represents the cream of Reformed theology.

Herman Witsius (1636-1708) was Professor of Divinity in the Universities of Franeker, Utrecht, and Leyden. A brilliant and devout student, he was fluent in Latin, Greek, and Hebrew by the age of fifteen, when he entered the University of Utrecht. He was ordained at twenty-one and served in several pastorates, filling both the pulpit and the academic chair over the course of his life.

“Characteristic of Witsius’s writings, this book is judicious and practical, pointed and edifying. It is meat for the soul. May God bless this reprint abundantly in the lives of many, such that the Lord’s Prayer may take on a new depth of meaning for true believers. Oh, to be more centered upon God Himself—hallowing His name, longing for the coming of His kingdom, doing His will! ” —Joel R. Beeke, President and Professor of Systematic Theology and Homiletics, Puritan Reformed Theological Seminary, Grand Rapids

“Herman Witsius, pastor-teacher of extraordinary sensitivity to the issues of piety and covenant theology, writes at length in this volume on prayer—both generally and specifically in relation to The Lord’s Prayer. Nor is this simply about prayer; The Lord’s Prayer is a ‘compendium of the gospel’ (Tertullian), a ‘body of divinity’ (Watson), and Witsius outlines with clarity how this model prayer provides a key to the shape and contours of the Christian life. Essential reading that will not disappoint.” —Derek W. H. Thomas, Minister of Teaching at First Presbyterian Church in Jackson, Mississippi, and John E. Richards Professor of Systematic and Practical Theology at Reformed Theological Seminary