An Analysis of Herman Witsius's "The Economy of the Covenants" by D. Patrick Ramsey & Joel R. Beeke (Paperback) 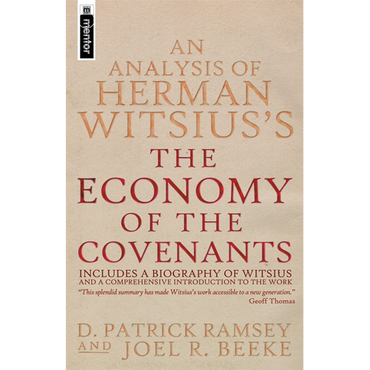 An Analysis of Herman Witsius's "The Economy of the Covenants" by D. Patrick Ramsey & Joel R. Beeke (Paperback)

The Economy of the Covenants is Witsius's magnum opus. He wrote it to promote peace amongst theologians who were divided on covenant theology. Witsius sought to be a theologian of synthesis who strove to lessen tensions between Christians. Covenants between God and man are essentially one-sided in that they are initiated by God. However they also require human responsibility in order to be implemented. Whilst being one-sided in initiation they are two-sided in administration. God's covenants are his main means of interacting with his creation in a broad sense yet Witsius also shows that a wrong view of the covenants leads to serious error in our concepts of salvation.

This book is an outline analysis of Witsius's work. It is a companion to the original to be read in conjunction with it. Using this book you will be able to see how Witsius's arguments progress subject-by-subject. By analyzing the work in outline you will be able to grasp the essence of the factors involved in explaining the origin and effects of God's covenants with his creation.

The analysis outline of Economy of the Covenants can be used as:

"The excellent writings of Herman Witsius were once regarded as standard works. It is a very welcome event that Witsius is now being introduced to today's readers. I wish the book a wide circulation and great usefulness." - Maurice Roberts

“No theologian ever expressed the nature of the Covenant of Grace more experientially than Herman Witsius…this splendid summary has made his work accessible to a new generation.” – Geoff Thomas