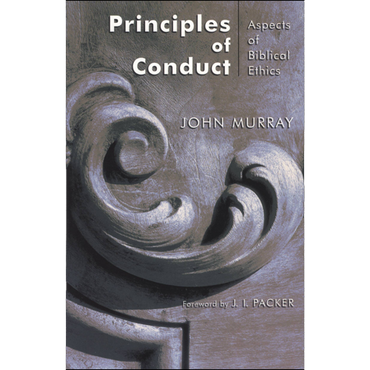 John Murray (1898-1975) was born in Scotland and educated in Glasgow, Edinburgh, and Princeton. He spent most of his distinguished career teaching systematic theology at Westminster Theological Seminary in Philadelphia.

Now back in print with a new foreword by J. I. Packer, this classic study clearly shows the organic unity and continuity of the biblical ethic. Murray addresses ethical questions relating to such topics as marriage, labor, capital punishment, truthfulness, Jesus' teaching in the Sermon on the Mount, law and grace, and the fear of God. Though the Ten Commandments furnish the core of the biblical ethic, Murray points the reader again and again to all of Scripture as the basic authority in matters of Christian conduct.

The biggest problem with books like Principles of Conduct is that they are so good, so full, and so rich, that the each principle written about is so easily forgotten when the next principle is elucidated. I realized that this had happened to me as, when I was almost finished with the book, I skimmed over the pages I had read just days previously and discovered that I wished I had time to read it again. The book is completely biblical. One look at the scripture index will quickly show that Murray's use of scripture is pervasive. This is not a book where Murray expresses his opinion about various topics, but is a book where the issues of biblical ethics are soundly dealt with from the primary source - the Bible itself. In this light I found that (of all the strong aspects of this book) the strongest characteristic to be the sound exegesis of often-mistranslated passages of scripture such as Matthew 5, 1 Corinthians 7 and 9, and Romans 6.
The description on the back of the book mentions, "Though the Ten Commandments furnish the core of the biblical ethic, Murray points the reader again and again to all of Scripture as the basic authority in matters of Christian conduct." The Ten Commandments are not explicitly dealt with in this book, but the ethical considerations that begin in creation and continue through the time of Christ and His church are explained. The methodology of discovering God's continuing revelation to mankind is known as biblical theology and Murray is a model for Christian theologians in this method. Murray is showing that the Ten Commandments were not a new thing God decided to mention at Sinai, but are rooted in the nature of God's creation. The Ten Commandments were neither new at creation, nor did they cease to be valid after the coming of Jesus Christ. Through this understanding of the biblical ethic, we come into a deeper understanding of how we may obey God and how we can love His law (Psalm 119:97) as the ethic that God has given man to live by.
I have always heard that Murray is a difficult read. Even Packer says in his Forward that Murray is considered by many to be "tough sledding." Personally, I did not think this book was that difficult to read. Though the implications are deep, Murray writes in a way that is so logical that it is very easy to understand. More than just logical, Murray is thoroughly biblical. I have found that his exegesis and use of biblical theology is rock solid. He thoroughly explains difficult passages in a way that is in solid agreement with the text itself.
I also found this book to be encouraging and helpful in my walk with God. My mind was just not filled with general facts, but was genuinely spurred on to greater devotion to Christ. It is a motivating book for the Christian who needs to be reminded time and again that he or she has been set free from the bondage of sin and has been resurrected to obedience to Christ. It is helpful for the Christian who is struggling to formulate a biblical ethic on the issues of marriage, capital punishment, and labor. It is helpful for any Christian who wants to know how they can serve God better in their day-to-day life.