Prepared by Grace, for Grace: The Puritans on God’s Way of Leading Sinners to Christ 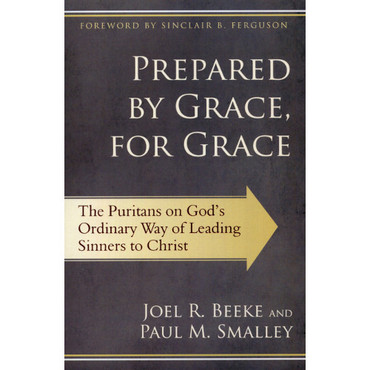 Prepared by Grace, for Grace: The Puritans on God’s Way of Leading Sinners to Christ

Few teachings of the Puritans have provoked such strong reactions and conflicting interpretations as their views on preparing for saving faith. Many twentieth-century scholars dismissed preparation as a prime example of regression from the Reformed doctrine of grace for a man-centered legalism. In Prepared by Grace, for Grace, Joel Beeke and Paul Smalley make careful analysis of the Puritan understanding of preparatory grace, demonstrate its fundamental continuity with the Reformed tradition, and identify matters where even the Puritans disagreed among themselves. Clearing away the many misconceptions and associated accusations of preparationism, this study is sure to be the standard work on how the Puritans understood the ordinary way God leads sinners to Christ.

Introduction: The Question of Preparationism

Joel R. Beeke is president and professor of systematic theology and homiletics at Puritan Reformed Theological Seminary, and a pastor of the Heritage Netherlands Reformed Congregation in Grand Rapids, Michigan.

Paul M. Smalley is a teacher’s assistant for Dr. Beeke.

“I can think of no abler team of writers in the world today to tackle the important issue of preparatory grace, with all of its attendant law-gospel implications, than Joel Beeke and Paul Smalley. As with legalism, preparatory grace suffers from verbal abuse—partly through ignorance of the real issues, and partly through prejudice for its supposed attempt to usurp gospel grace. Beeke and Smalley have provided us with a plethora of historical and theological material to enable us to walk through this controversial but important issue. It has been suggested that to understand the relationship between law and gospel is to be a theologian; on this score, these authors are theologians par excellence.” — Derek W. H. Thomas, professor of systematic and historical theology, RTS Atlanta, and minister for preaching and teaching, First Presbyterian Church, Columbia, South Carolina

“No subject is more important to man than knowing how he may be saved. The Puritans excelled in their exposition of a scriptural gospel. Yet while they rejected a theology of human merit and of free will, they differed somewhat in their view as to the preparatory work of God in those who are saved. The authors of this comprehensive study expound most carefully these different Puritan emphases and also critique the views of such modern writers on the Puritans as Perry Miller, George Marsden, Norman Pettit, and R. T. Kendall. The extensive use made by the authors of both the available primary and secondary sources indicates the great care that has been used by the writers to be fair to the great Puritans and in this way to help the modern reader. I recommend this study especially, but not only to preachers. It will help to cure us all of the modern danger of giving premature assurance to those who profess faith in Christ without evidences of being broken to repentance. The study of this book could do much to transform our evangelistic influence today.” — Maurice Roberts, former minister of the Inverness Free Church of Scotland (Continuing) and former editor of the monthly magazine The Banner of Truth

“Prepared by Grace, for Grace is a truly remarkable book. Many have referred to Puritan ‘preparation for grace,’ but hardly at all with serious scholarly attention given to the original sermons or writings.  But here is finally a study that is both thorough and fair. We learn that preparation can mean many different things, with diverse theological settings. But the vital issue is still with us today: If people are dead in sin, how can we continue to talk to them?

Reformed people sometimes find it hard to put together thinking theologically and doing effective evangelism.  If unbelievers are really dead in sin, what’s the point?  Can evangelism be more than just mouthing words that no one understands?  Francis Schaeffer’s ‘pre-evangelism’ had much the same agenda as ‘preparation,’ making it clear to us again that we all must address these concerns as we work within our nihilistic culture. This book gives us a flying start.” — D. Clair Davis, professor and chaplain, Redeemer Seminary, Dallas