A Commentary on Isaiah by Joseph A. Alexander (Paperback) 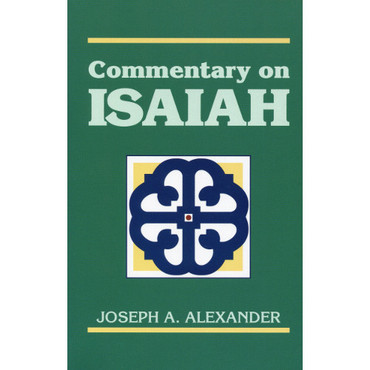 A Commentary on Isaiah by Joseph A. Alexander (Paperback)

Joseph Addison Alexander (1809-1860) was a linguist, educator, and author. Born in Philadelphia, he received most of his early education from his minister father, Archibald, and quickly revealed remarkable linguistic gifts. At fifteen he entered the junior class of Princeton College, graduating with highest honors in1826. After two years' private study of ancient languages, he became adjunct professor of ancient languages and literature at the college in 1830. In 1834 he moved to Princeton Seminary, instructing first in oriental and biblical literature and after 1851 in biblical and ecclesiastical history. During these years he authored several biblical commentaries, which established his reputation in Europe as well as America.

In this chapter-by-chapter and verse-by-verse commentary on Isaiah, the author succeeds admirably in making the prophet Isaiah's meaning clear. The scholarly and informative general introduction (over 70 pages) to the Book of Isaiah alone is worth the purchase price. As Dr. Unger points out in his Introduction, the author's unusual knowledge of Hebrew makes his work especially useful to students of the original text. The layperson, however, can benefit also due to Dr. Alexander's ability to make himself clearly understood.

I am currently teaching a class on Isaiah. I had seen this commentary referenced in some other material. I am very pleased with the scholarship of Alexander's commentary.