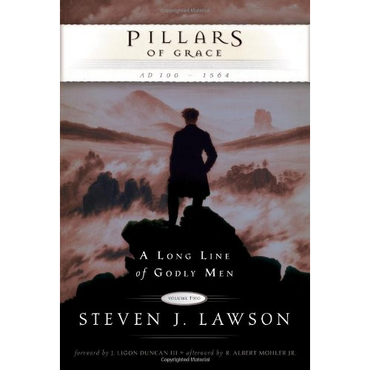 The doctrines of grace are often known as the five points of Calvinism, but they were not the invention of John Calvin or his reforming cohorts of the sixteenth century. Rather, they are biblical doctrines, as Dr. Steven J. Lawson demonstrated in his book Foundations of Grace (2006). Now, in Pillars of Grace, Dr. Lawson shows that the doctrines of grace have been understood and taught—sometimes in embryonic form, sometimes with great clarity—throughout church history. From the time of the early church fathers to the years of the Reformers, there have been key men in the church, pillars as it were, who stood on the foundation of Scripture and upheld the truth of God’s sovereign role in salvation. In Pillars of Grace, Dr. Lawson walks readers through the ups and downs of church history, profiling these voices for the truth. The inescapable conclusion is that the doctrines of grace are no innovation, but the consistent witness of some of the greatest men of the church.

Dr. Steven J. Lawson is president and founder of OnePassion Ministries, a ministry designed to equip biblical expositors to bring about a new reformation in the church. He is a board member and teaching fellow for Ligonier Ministries, a board member and professor of preaching at The Master's Seminary, professor in residence for Truth Remains, and a visiting professor in the Doctor of Ministry program at Ligonier Academy. A popular conference speaker and author, Dr. Lawson's books include, The Evangelistic Zeal of George Whitefield, The Gospel Focus of Charles Spurgeon, and Pillars of Grace.

Pillars of Grace by Steven J. Lawson is the second installment in his series, A Long Line of Godly Men. In volume one, Lawson walked readers through every book of the Bible and demonstrated how the doctrines of grace emerge on every page of Scripture.

Volume two also alerts readers to the precious doctrines of grace. However, this volume shows how these God-centered doctrines emerge in the writings of the early apologists, church fathers, medieval theologians, and the Protestant Reformers.

The author quickly reveals his purpose for writing at the outset: "As we trace this long line of godly men from the first century to the sixteenth century, may the Lord use these pages to raise up new messengers who will sound the trumpet of His distinguishing grace. In this hour, may He prepare a new generation of renewed minds and passionate hearts to proclaim these glorious truths of Scripture." Lawson accomplishes his goal in this weighty book, which spans over 530 pages.

From the beginning, the book has a sort of predictable cadence. The author presents a brief historical overview that helps set the stage for introducing a given historical figure. Next, the author includes helpful biographical data that concerns the historical figure under investigation. Specific writings are introduced and briefly evaluated. The most helpful section includes a discussion how the historical figure under consideration interacts with the doctrines of grace. Issues include the sovereignty of God, radical depravity, unconditional election, irresistible grace, particular redemption, perseverance of the saints, and the doctrine of reprobation. Finally, Lawson concludes each chapter with a challenge that is directed to the reader, and is specifically directed to pastors and professors. Each challenge beckons readers to hold forth the doctrines of grace, to courageously proclaim the truth of God's Word, and contend earnestly for the faith.

Pillars of Grace promotes the doctrines of grace

I applaud Dr. Lawson for courageously proclaiming and promoting the truth of God's Word. Some of the truths contained in this book are very unpopular. But truth is never dictated on the basis of consensus, relevance or popularity.

Dr. Lawson introduces readers to heroes that one might expect - heroes like Augustine, Wycliffe, Luther, Tyndale, and Calvin. But he also focuses his attention on the lesser knows - men like Isidore of Seville, Gottschalk of Orbais, and Bernard of Clairvaux. These lesser known figures are a tremendous encouragement for anyone who is investigating the development of the doctrines of grace.

Pillars of Grace is a Filled With Encouragement for Pastors

While Lawson's work is theological and historical in nature, it reads like an in-depth, theologically charged devotional. It is filled with God-centered citations and motivating examples of godly living and courageous Christian conduct.