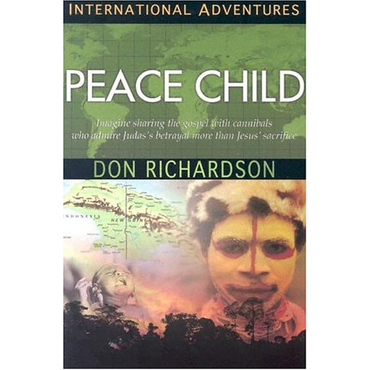 On every continent, in every nation, God is at work in and through the lives of believers. From the streets of Amsterdam to remote Pacific islands to the jungles of Ecuador and beyond, each international adventure that emerges is a dramatic episode that could be directed only by the hand of God. Imagine sharing the gospel with a tribe of cannibals who admire Judas's betrayal more than Jesus' sacrifice. Not only murder, but treacherous murder, had been the ideal of the headhunting Sawi people of New Guinea for generations when missionaries Don and Carol Richardson risked their lives to live among them. As they searched for the key that would open the gospel to the Sawis, God moved in a remarkable way, revealing His true Peace Child, a figure the Sawis knew vaguely from their own mythology. To the Hebrews He was the Lamb of God, to the Greeks, the Logos. But to the Sawi He was the "Tarop Tim Kodon, the Perfect Peace Child--the ideal fulfillment of their own redemptive analogy! A deeply moving, unforgettable adventure!

Don Richardson, author of Secrets of the Koran, Lords of the Earth and Eternity in Their Hearts, has been studying the Muslim world for more than 30 years. He and his wife, Carol, spent 15 years among the Sawi, a Stone Age tribe of Irian Jaya. Don designed an alphabet suited to the Sawi language, authored 19 primers, taught the tribesmen to read in their native tongue and translated the entire New Testament. More than half of the Sawi accepted Jesus Christ as their Lord and Savior. Since 1977, Don has served as ambassador-at-large for World Team, a mission organization. Don holds an honorary doctorate of literature from Biola University in La Mirada, California, is an ordained pastor and speaks at more than 40 church conferences each year.
Endorsement
Talk about living on the edge, Don Richardson, his newlywed wife Carol and seven-month old son Stephen step from the 20th century into a stone-age cannabilistic cultural with gruesome and horrific practices. This book reads like the true adventure it is, starting with the narration of life, death, betrayal, parties where the honored guests become the special of the day. Enter this family of three into the midst of suspicious cannibals bringing three rival factions together each vying jealously for the knifes, steel axes, matches, machetes, mirrors and medicine, you get a powder keg with small to large explosions daily. Imagine living in a grass hut with your wife and baby huddled inside while fierce warriors and arrows fly throughout the sky. Imagine facing an entire clan beating and burning a man that the sorceress has declared to be a soul-less zombie and praying him back to life, only by a miracle of God. These and other adventures show what it's really like to walk by faith, trusting only God to protect you, and doing His will to win people to Christ. There are many hair-prickling turns in this story, leaving you at the edge of your seat, wondering if it'll all end in disaster. But the glory of the Lord is that He had left Himself a witness in the strange custom of the "Peace Child" that Richardson was able to use to point to the Perfect Peace Child, the Son of God, Prince of Peace, to bring the Sawi tribe to a knowledge of Jesus Christ. Truly awe inspiring. I am now reading the sequel "Lords of the Earth".