The Child at Home by John S.C. Abbott (Paperback) 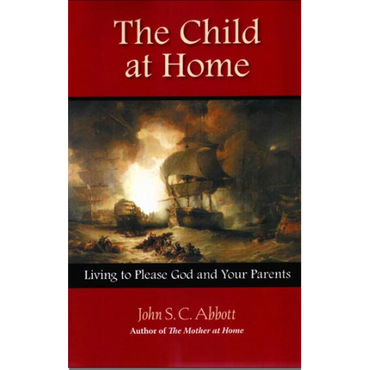 The Child at Home by John S.C. Abbott (Paperback)

"This book is intended for the children of those families to which 'The Mother at Home' has gone. It is prepared with the hope that it may exert an influence upon the minds of the children, in exciting gratitude for their parents' love, and in forming characters which shall ensure future usefulness and happiness." — From the author's Preface John Abbott (1805-1877) was the brother of Jacob Abbott and the author of numerous works especially for children and young people. He was educated at Bowdoin college and Andover theological seminary, graduating from the former in 1825. He was ordained to the ministry in the Congregational church in 1830, and was settled successively at Worcester, Roxbury, and Nantucket, Mass. His first published work, "The Mother at Home," appeared in 1833, and was followed later that year by "The Child at Home." In 1844 he relinquished the pastorate, and devoted himself exclusively to literature, but occasionally resumed his ministerial labors for brief periods, and in 1866-'8 acted as state supply in New Haven. "In a moving, illustrative way, Abbott's The Child at Home powerfully cultivates within children's consciences the need to honor God and their parents by promoting the need for heartfelt obedience, religious truth, genuine piety, biblical character traits, a sense of responsibility, and a dread of deception. The dozens of stories included make this book understandable for even very young children, while simultaneously retaining the interest of teenagers. Buy this book for every one of your children; better yet, read it aloud to them and discuss its contents together as a family." — Dr. Joel R. Beeke, Puritan Reformed Theological Seminary