Papal Power: Its Origins and Development by Henry T. Hudson 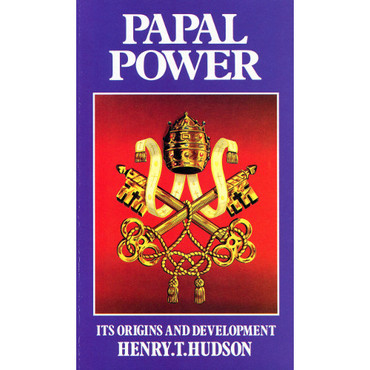 Papal Power: Its Origins and Development by Henry T. Hudson

In recent years, front page headlines have proclaimed, 'John Paul Superstar'. David Sanford, wrote in Harper's Magazine: 'The pope is more popular than the Beatles who, according to John Lennon, were more popular than Jesus Christ; where this leaves Jesus Christ is not clear.' Morris West, in his television documentary, The Paradox of the Papacy, repeatedly made reference to the contrast between the lives and ministry of the New Testament apostles and the lives and ministry of the men who claim to sit on the 'throne' of St Peter. How can the contrast be explained? How does one begin to account for the popularity and the power of the Roman pontiff? A 'trajectory' which begins with Simon Peter and reaches to a man who today can lay claim to possessing primacy over the whole world, and to the personal prerogative of ex-cathedra infallibility, is a paradox indeed. This well-documented book will help the reader to answer these questions and to explain the paradox. Dr Henry Hudson has lived in Italy for several years. He is at present pastor of Calvary Chapel, Massillon, Ohio, U.S.A. His academic qualifications in the field of history and theology equip him to write on the subject of this book.

The chapter on the Patristics was heavily reliant on secondary sources; I wished he could have dealt with the early Patristics directly. However, the author was able to bring out a lot of quotation from primary sources concerning Luther and the Reformation. The book had a good chronology of Luther’s developing view of the Papacy. It also quoted a good amount of the documents directly in the chapters touching on Vatican one and two. The mention of fallible popes on pages 151-52 and 172 gives names of heretical popes and contradicting popes for readers to do further research if they like. The copy I have of this book was published by the Trinity Foundation and I enjoyed appendix A, which featured a tract that was an alleged speech delivered in Vatican 1 in opposition against Papal infallibility. It was surprising to learn from the book that there has been a stream of Catholics who historically opposed the idea of Papal infallibility even up to the time of Vatican 1, and this stream include reputable Catholic scholars. It was actually a greater delight to read appendix A of an actual Catholic objection to Papal infallibility in print during the sessions of Vatican 1. This book makes me want to read more about the Pope (it’s history, doctrine, etc) and perhaps even chasing some of the trails of footnotes and sources cited. I wished the discussion of the Biblical data could have been longer and rather than discussed in both the beginning and end of the book, it might have been more better to organize it and present it in the beginning. I do recommend this book. - SLIMJIM