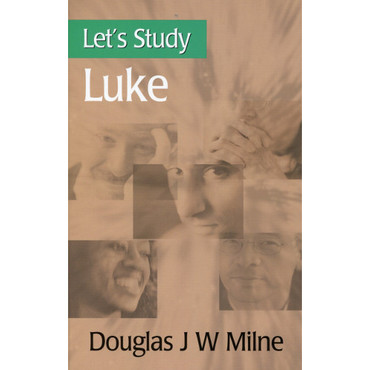 Luke’s Gospel is well suited to 21st century readers because it is written in a style that appeals to the imagination, deals with people’s lives, is easy to read, and wholly enjoyable. Through his narratives Luke portrays Jesus vividly and makes him accessible for anyone who seriously reads his Gospel.

Let’s Study Luke will not only guide you through the twenty-four chapters of Luke’s fascinating book, but will help you to understand and apply it in practical ways to your daily life.

Douglas J. W. Milne was born in Dundee, Scotland. After completing MA and BD degrees at Aberdeen University, he did post-graduate work in America (ThM, Westminster) and later in South Africa (ThD, Potchefstroom). He was a pastor/preacher in his native Scotland for seven years before accepting a call to teach in the Presbyterian Theological College, Melbourne, Victoria, Australia. Having taught New Testament, he also lectured on Theology and Ethics.

For the first eighteen years there he was also resident preacher for a congregation near the heart of Melbourne. He was appointed Principal of the College in 2001, following the retirement of Allan Harman, and held this position until his own retirement in 2011. Besides having a wider preaching ministry, he also lectures regularly at the Biblical Graduate School of Theology in Singapore. He is married to Joan and they have two children and two grandchildren.

Douglas Milne is the author of the commentary on Luke’s Gospel in the Trust’s Let’s Study series.