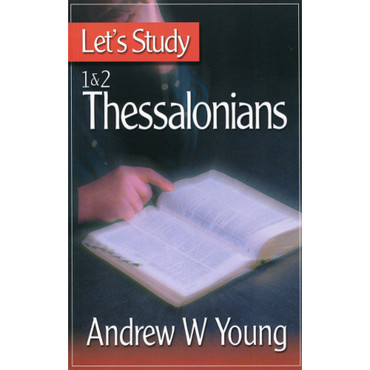 ‘Given the relationship between Paul and the Thessalonian Christians, it should not surprise us that his letters to them throb with tenderness and care…here, as perhaps nowhere else in his letters, we see how the apostle loved his converts and laboured to lead them on in the faith. This should make every serious Christian, and especially every responsible Christian leader, turn with eagerness to the text of the letters that await us.’ -From the Introduction by Andrew Young

Rev Dr Andrew W. Young was the founding Principal in 1995 of Grace Theological College of New Zealand, now located in Manurewa, Auckland. He previously served as pastor of Grace Presbyterian Church, Christchurch, New Zealand and, briefly, in ministry in Australia. During his time as Principal he authored the commentary on 1 & 2 Thessalonians in the Trust’s ‘Let’s Study’ series. He has a Ph.D. from Lincoln College, New Zealand.

My interaction with seminary teachers, preachers and church folk from different walks of life served in different ways to remind me that the most important thing of all is to know and walk with the living God. Theological training is valid and important, but it must in the end lead to knowing God himself or it can be a distraction, if not a positive hindrance, to true godliness.

This philosophy has been maintained through his current service as Director of Ezra Ministry, a research, writing and teaching ministry aimed at spiritual life and leadership development, where the emphasis is on ‘spiritual formation rather than theological education, transformation rather than information, and relationships rather than results.’

In March 2008 Dr Young was appointed Associate Principal of Grace College, South Island (a position in which he served until 2011). He relocated in April 2008 with his wife Nola and son John to take up the pastorate of Wyndham Evangelical Church in Southland, along with his new responsibilities towards the College. He remains on the Board of Governors of Grace College as Principal Emeritus, and continues to lecture (Biblical Theology & Pastoral Theology). Dr Young has been described as ‘a man of deep spirituality with a profound knowledge of both the teaching of Scripture and the history of doctrine.’

‘The whole unfolding Let’s Study series is a must for every Christian home that is
serious about getting to know the Word.’ — COVENANTER WITNESS