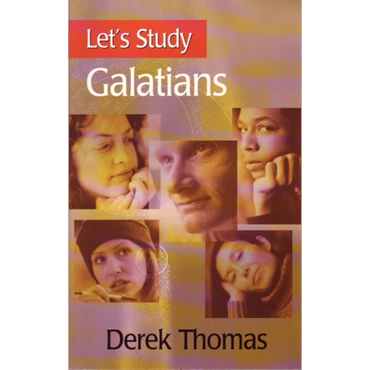 After pastoring for 17 years in Belfast, Northern Ireland, Thomas returned to the USA in 1996 where, in addition to his service to the Jackson campus of RTS, he served as the Minister of Teaching at First Presbyterian Church in Jackson until 2011, when he joined the staff at FPC, Columbia. As well as serving in the pastorate, Derek has served as editor of the Evangelical Presbyterian, a monthly denominational magazine.

A graduate of RTS in 1978, he gained a Ph.D. from the University of Wales, Lampeter in Calvin's preaching on the book of Job. He has written or edited several books and has contributed to the Trust's Let s Study commentary series (Galatians, Revelation). In 2004, Derek Thomas became Editorial Director for The Alliance of Confessing Evangelicals and the editor of its e-zine, Reformation 21. He married his wife, Rosemary, in 1976 and they have two adult children and two grandchildren.

Paul’s letter to the churches of Galatia seems to burst on the reader like a sudden storm. The issues it raises still generate controversy, even after two thousand years of church history. In large measure this is because what was at stake when Paul wrote was the gospel itself. The question of whether human works were to play any part in the justification of sinners had to be answered clearly if the fledgling Christian movement was to prosper. And Paul was determined to answer it with total clarity. This explains the vigour and energy of his language, and the impact the letter has had down the centuries.

Derek Thomas explains the issues dealt with in the letter and refutes the contentions of the so-called ‘new perspective’ on Paul. His book is an important addition to this expanding series of study guides.

I have enjoyed every "Let's Study" book I have read so far. These books are very readable commentaries. They include the text of the Scripture and then explanation and expositing on the text. Each one I have read so far has been a different author, so the style of writing is different, but they have all been meaty treatises on the Bible. Yet not so deep that they are beyond the reach of the average person. If you are intimidated by commentaries, these are a great place to start in digging into a book of the Bible. They also include a group study guide at the back to use in a small group or Bible study setting.
In this book, Let's Study Galatians, the author takes us through some background behind why Paul is writing this book. There is some debate over when the book of Galatians was written and how that might have affected what Paul wrote regarding the whole Gentiles and Jews controversy and the need for keeping the law to be a Christian. The author really brings out the tone of Galatians and Paul's directness to the Galatians in his rebuke towards them. I really enjoy how he gives the background and how the other apostles might have been affected by these issues, particularly as Paul talks about his confrontation with Peter in the book of Galatians.
For help in understanding the background of Galatians and the issues that it addresses, this is a readable and useful commentary. Again another winner in the Let's Study series (which, by the way, is on sale at Banner of Truth through the end of December).