Lectures on Calvinism: The Stone Lectures by Abraham Kuyper (Hardcover) 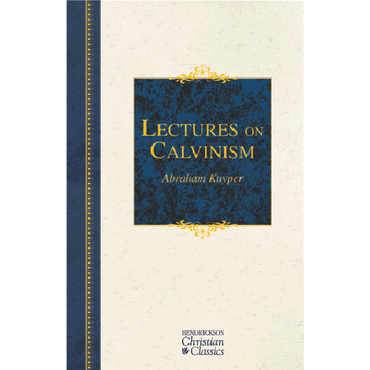 Lectures on Calvinism: The Stone Lectures by Abraham Kuyper (Hardcover)

Lectures on Calvinism offers a timeless exploration of the theology and thinking of key reformer John Calvin. These six classic lectures by distinguished scholar Abraham Kuyper (1837–1920) on the key figure in Reformation theology were delivered at Princeton Theological Seminary in 1898. Kuyper introduces Calvinism as a life-system, discussing its relationship to religion, politics, science, and art. According to Kuyper, Calvinism seeks to unify the cosmos under universal laws. For instance, he states that predestination proves that a set of laws exists to govern the world, and science is merely trying to figure them out. Kuyper defends Calvinism in the realm of art as well, providing a thorough and elegant explanation of this outlook on life. The collection is called Lectures on Calvinism and not lectures on Christianity because Kuyper believed that Calvinism most truthfully and most completely articulates the Biblical Christian faith.

Dr. Abraham Kuyper (1837–1920) was a Dutch Calvinist theologian, philosopher, and politician. As leader of the Anti-Revolutionary Party in the Netherlands, he served as Prime Minister of his country from 1901–1905. He occupied himself with the task of reconstructing the social structures of his native land on the basis of its Calvinistic heritage in almost every area of life. He developed Neo-Calvinism, which emphasizes the sovereignty of Jesus over all mental pursuits and supports the idea that there is a grace given by God to all things in order to sustain the continued unfolding of creation. Kuyper wrote a number of books, including Conservatism and Orthodoxy (1870), The Social Question and the Christian Religion (1891), and Common Grace (1902).

I think it's probably unlikely that anyone will read these lectures by Kuyper and agree word for word with absolutely everything that's in here. There are enough distinctives in Kuyper's thought that make his views somewhat particular, as are the views of everyone. But there is no question that one can surmise from reading this book that Kuyper, philosophically speaking, was a man ahead of his time.
The basic point of this book is to present a Calvinistic worldview that penetrates and transforms all aspects of society - politics, science, the arts, religion, etc. In many ways, such an attempt was, and is, revolutionary by Christian standards. Surprisingly few Christians, either today or in Kuyper's day 100 years ago, think christianly about things beyond the pale of pure religion or spirituality. Many Christians who are indeed quite Christian in regards to religious beliefs and even personal holiness do not take Christianity beyond these areas into the world and in the world's legitimate disciplines like politics or science. There are several reasons that are regularly given for this, but clearly the most pervasive is that many Christians haven't thought about such things and have unnecessarily limited their ability to transform the world. This attitude is decidedly unacceptable to Kuyper, and this comes through loud and clear in this book.
Not only was Kuyper ahead of his time in suggesting a full orbed Christian worldview in place of a compartmentalized Christianity, but he was also prophetic in laying down a solid framework for comparative religious and worldview studies. Those who struggle with answering assertions which suggest that all religions and worldviews are more or less the same should read Kuyper here. Kuyper is very good in contrasting worldviews, showing them to be incompatible with each other, and forcefully arguing for that worldviews can and should be differentiated from each other on the basis of truth versus error. In particular, Kuyper plunges head first into the modernist craze of his time and calling for a full orbed Christian rebuttal to modernism that can only be achieved by developing a full-orbed Christian worldview that can compete with modernistic tendencies in science, politics, etc.
Not every Christian will agree with Kuyper's views, and not even all self-described Calvinists will either. Calvinism is not monolithic on many of these questions, though Kuyper's views are indeed compelling and often persuasive. I think the biggest compliment this book can be given is that it should raise the consciousness of the Christian reader to think outside his own backyard and yearn to develop his faith into a comprehensive life system which is applicable to any circumstance and any discipline or field of study. Kuyper wanted Christians to expand their horizons and expand their influence by outthinking and outworking their worldview opponents, and this is a message that is every bit as critical for Christians to hear today as it was when these lectures were given 100 years ago.