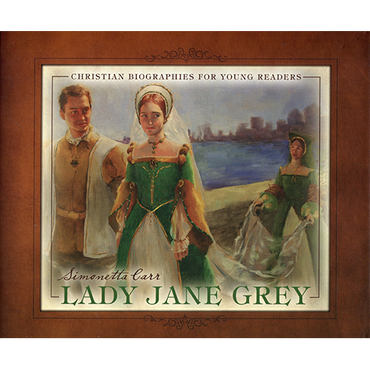 Although she ruled England for less than two weeks, Lady Jane Grey has been admired for generations for her courage and faithfulness to the gospel—even though she was executed for treason at the age of sixteen. In this addition to the Christian Biographies for Young Readers series, Simonetta Carr tells Lady Jane Grey’s story of intrigue and explains its context: the tumultuous politics of Reformation England. Maps, photographs, and beautiful illustrations decorate the narrative, helping young readers visualize what life was like in sixteenth-century England. More importantly, they will learn the story of an extraordinary young girl who understood that she was saved only by the mercy of God and the merits of the blood of Jesus Christ.

Simonetta Carr was born in Italy and has lived and worked in different cultures. A former elementary school teacher, she has home-schooled her eight children for many years. She has written for newspapers and magazines around the world and has translated the works of several Christian authors into Italian. Presently, she lives in San Diego with her husband, Thomas, and family. She is a member and Sunday school teacher at Christ United Reformed Church.

“The short life and remarkable testimony of Lady Jane Grey is one of the extraordinary stories of Christendom. As a grandmother of twelve, I am grateful for a book that shows young readers the power of the gospel in the life of a young girl and that inspires them to live for God’s glory.” — Susan Hunt, pastor’s wife, mother, grandmother, speaker, and author of numerous books for women and children, including Heirs of the Covenant and Big Truths for Little Kids.

“The dramatic story of Lady Jane Grey has captured the imagination of people of all ages and eras—high-stake royal politics, ruthless power-plays, religious controversies, and tragic ending. Despite it all, the biblical faith of this remarkable teen-ager gave her dignity under pressure and a firm hope that did not disappoint. Simonetta Carr is to be greatly thanked for introducing a new generation of children to Lady Jane and her inspiring example of Christian faithfulness.”  — Rev. Canon Dr. John Ashley Null, Fellow, Royal Historical Society, London, and Research Fellow, Theological Faculty, Humboldt University of Berlin

“Jane Grey was one of the most remarkable young people in English history. Not only was she frighteningly bright but she stood up for herself in an age when girls were meant to be submissive. Most of all, despite being all alone, she defended her Christian beliefs vigorously and refused to abandon her faith in Jesus Christ, even though she knew that would mean she would be beheaded.” — Eric Ives, Emeritus Professor of English History at the University of Birmingham, and author of the definitive study Lady Jane Grey: A Tudor Mystery.

“Simonetta Carr has done it again: a lavishly illustrated and beautifully told story of an important Christian figure. Further, unlike so many women in church history who are known to us more as the wife or daughter of some famous saint, Lady Jane Grey possesses an importance all of her own. As with all of Simonetta's books, this is one to read and to cherish. ” -  Carl Trueman, Professor of Historical Theology and Church History and Paul Woolley Chair of Church History at Westminster Theological Seminary, Philadelphia.