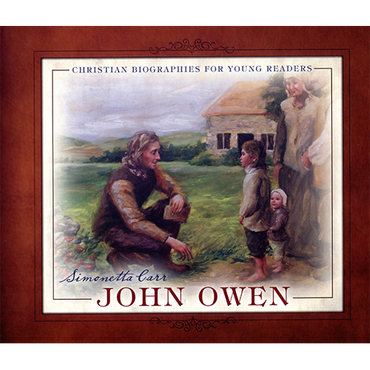 John Owen was a great Puritan preacher who lived in England. In this book, Simonetta Carr informs readers about Owen’s life, revealing some of the things that interested him while in school, the care he showed to people when he became a pastor, and the influential books that he wrote. Readers will also come to understand the difficult times in which Owen lived, and how he handled the terrors of war and religious persecution. Full of illustrations and fascinating information, this is an ideal way for young readers to learn history.

Simonetta Car was born in Italy and has lived and worked in different cultures. A former elementary school teacher, she has home-schooled her eight children for many years. She has written for newspapers and magazines around the world and has translated the works of several Christian authors into Italian. Presently, she lives in San Diego with her husband Thomas and family. She is a member and Sunday School teacher at Christ United Reformed Church.

"Simonetta Carr’s book on John Owen is a delightful introduction to his life for the very young. In the tradition of her earlier books on Calvin and Augustine, she retells Owen’s story with flair and passion, and accompanies it with great illustrations which help to make his life and times vivid and exciting. Heartily commended!" - Carl Trueman

"Simonetta Carr’s wonderful biography of John Owen is the third book in what I hope will be a growing collection of biographies of Christian heroes. In clear, unembellished language Carr chronicles the life of the “Prince of Puritans” through a tumultuous period of English history. This book manages to be simple without being shallow. Young readers will admire the integrity of Owen’s conscience as a man living in a difficult time and relish the rich descriptions of Owen’s theological genius. This is a masterful book. I trust that many others will follow." -Tedd Tripp

"This book is delightful, both in its illustrations and in the way it presents the Puritan John Owen. While far from perfect, Owen was a man who lived in a tumultuous time, and through it he tried to live faithfully before God. Simonetta Carr wonderfully takes readers on a brief journey through Owen’s life, a journey that will be enjoyed by children and adults alike." - Kelly M. Kapic

"Owen was, and remains, a very important teacher of God's ways, and it is good to introduce young people to him." - J.I. Packer