John Calvin, A Heart for Devotion, Doctrine, and Doxology by Burk Parsons (Hardcover) 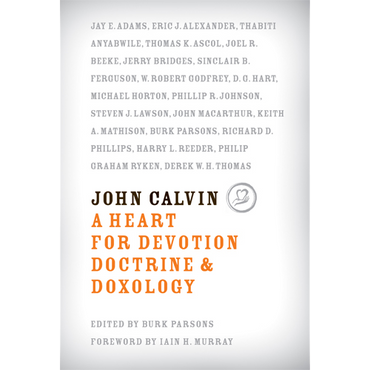 John Calvin, A Heart for Devotion, Doctrine, and Doxology by Burk Parsons (Hardcover)

Editor bio: Rev. Burk Parsons serves as minister of congregational life at Saint Andrew's Chapel in Sanford, Fla., and is the editor of Tabletalk, the monthly Bible-study magazine of Ligonier Ministries. He holds a degree in biblical studies from Trinity College and the M.Di. from Reformed Theological Seminary. Rev. Parsons is also editor of the book Assured by God: Living in the Fullness of God's Grace.

In twenty succinct chapters, these men examine Calvin the man; his work (as a Reformer, a churchman, a preacher, a counselor, and a writer); and his teachings (on subjects as diverse as the Holy Spirit and prayer). What emerges is a multifaceted portrait of a man whose contributions to Christian thought and Christian living were significant indeed, a man whose life, work, and teachings are worthy to be remembered and studied even in the twenty-first century.

There are so many caricatures of Calvinism (and Arminianism) found on the web that it can be difficult to know exactly what Calvinism really is. What better way to do that than to read about John Calvin as written by contemporary historians, authors, preachers and theologians?

"...the amount of misrepresentation to which Calvin's theology has been subjected has been enough to prove his doctrine of total depravity several times over!"
-J.I. Packer, The Collected Shorter Writings of J. I. Packer

There are so many quotable quotes in this book it's difficult to choose which ones to include in this review to whet the appetite of anyone who might be interested in reading the book.

Iain H. Murray writes this in the Foreward:

"Sometimes the impression can be given to other Christians that we regard `Calvinism' as co-terminus with Christianity and that we think all gospel preaching can be fitted into the five points. The five points are not to be depreciated, but God is incomprehensibly greater than our understanding, and there are other truths to be preached far beyond our capacity to harmonize.

Calvin cautions us here. In speaking of the indiscriminate invitations of Christ in John 5, he observes, `He is ready to give himself, provided that they are only willing to believe.' He can say that `nothing of all that God wishes to be saved shall perish' and yet warn his hearers lest the opportunity of salvation `pass away from us.' He speaks of Christ's `great kindness' to Judas and affirms, `Christ does not lay Judas under the necessity of perishing.' If on occasions, when in controversy with opponents of Scripture, Calvin unduly presses the implications of a doctrine, he guards against that temptation in his general preaching and teaching. He does not hesitate to teach that God loves those who will not be saved; indeed, he writes that God `wishes all men to be saved,' and to the objection that God cannot wish what He has not ordained, it is enough for Calvin to confess: `Although God's will is simple, yet great variety is involved in it, as far as our senses are concerned. Besides, it is not surprising that our eyes should be blinded by intense light.' Our duty, he would say, is to adore the loftiness of God rather than investigate it."

The book is very accessible to any audience and has very few words that need to be looked up unless the reader is a very new Christian and very unfamiliar with Biblical terms.

Some of the first few chapters about Calvin's life (each written by a different author) have some repeated information. To put it in software terms, I'm not sure if this is a feature or a bug. Meaning, I'm not sure if more editing should have been done or if it was intentional to let each author's account be left alone. In any case, each account fills in some details that others hadn't and none of it is conflicting.

For the most part the book is not defensive or polemic. Arminianism isn't brought up much until the chapter by John MacArthur entitled Man's Radical Corruption. I'm not sure if he's the best person to be talking about Arminianism, especially since he calls it a "scheme." Other than that there is occasional mention of Calvin's objectors but the book just gives an account of how he counters them.

Since the book is written by contemporary authors, we can get a glimpse of how Calvin contrasts with some of our typical current evangelical thought and vocabulary. A couple of examples:

"His language here is strikingly different from that of contemporary evangelicalism. It is hard to imagine him speaking about `letting Jesus into my heart' or `praying to accept Jesus'; indeed, for Calvin, the movement of conversion is not `getting Christ in' but `getting into Christ.'"

"Calvin resisted the temptation to redesign the church and followed the Reformation pattern of returning the church to its biblical design and apostolic simplicity. He was convinced the church had a sufficient designer, Jesus Christ, and an effective design, which was delineated in Scripture and displayed in the church of the first century. Clearly, Calvin would abhor the efforts of today's church leaders to `redesign' the church. He was aware that the Lord does not call us to pray for church designers, since the designer of the church is Christ, but to pray for `builders and laborers' to faithfully build on `the foundation of the apostles and the prophets, Christ Jesus himself being the cornerstone' (Eph. 2:20)."

This book is not only good for those who aren't familiar with Calvinism, but also for those who would call themselves Calvinists but don't know a lot about Calvin himself and what classical Calvinism really is. Since each chapter is relatively short, none of the subjects are gone into in great depth but this gives the reader an idea of whether or not they would like to go further in investigating Calvin and reformed theology. It also sheds light on the fact that he's not just about theology and TULIP. For myself, I learned how much he emphasizes prayer and will be reading more about that from him.

I enjoyed this book very much and wholeheartedly recommend it.