In Service to the Church: Essays in Honor of Dr. Robert Paul Martin 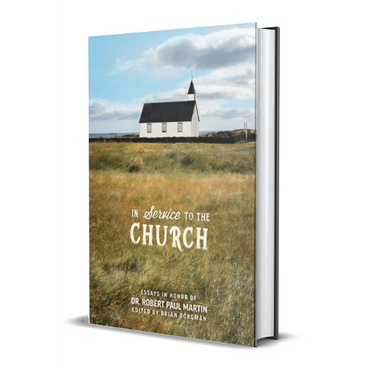 In Service to the Church: Essays in Honor of Dr. Robert Paul Martin

B.B. Warfield said, "What we need in our pulpits is scholar-saints become preachers." Dr. Robert Paul Martin was a scholar-saint become preacher-pastor. “Dr. Bob," as he was affectionately called by his students, was a biblical scholar of the highest order, but he was also a godly churchman. Dr. Bob devoted his life to the Word of God and to the good of the church. He taught tirelessly at seminaries at home and abroad. He labored as a pastor at Trinity Baptist Church, Montville, NJ and Emmanuel Reformed Baptist Church, SeaTac, WA. He was also a writer. His journal articles (included in this volume) and books have been a blessing to the church. Dr. Bob went home to be with the Lord on February 3, 2016.

"Robert was obsessed with God himself. He was overwhelmed by his majesty, his beauty, his holiness, his grace. He sought his glory, he desired his presence, he modelled his life on God's attributes. Other Christians may say that evangelism or missions or revival or social reconstruction is their great concern, but Bob had only one concern: God Himself-to know him, to mirror him, to see him glorified."

"I can say that one of the blessed fruits of the relationship Dr. Bob and I sustained to one another, is that I now understand more fully what Solomon meant when he wrote that 'The memory of the righteous is a blessing' (Proverbs 10:7)."

"He was ... a Christian Gentleman of the fine Southern variety, combining in his temperament courtesy, kindness, firmness, loyalty, and gentleness."

"I am thankful for Dr. Bob's labors and desire to honor his legacy with this contribution."

Festschrift is a German word, meaning "a celebration writing," and refers to a book written in honor of a person who has made a significant contribution to his field of study. The essays are written by friends, colleagues, and students. Most of the time such a volume is written while the honoree is alive, sometimes it is produced posthumously. Such a volume then is not only a celebration, but it is also a memorial. This book qualifies as both a celebration and a memorial to the life, ministry, and writings of Dr. Robert Paul Martin.