After Darkness, Light: Essays in Honor of R.C. Sproul 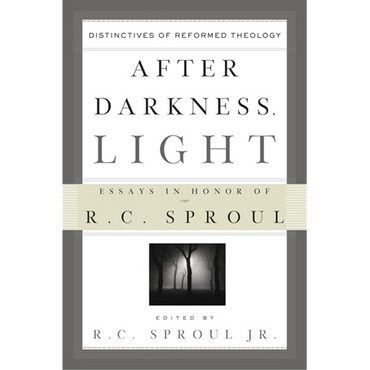 After Darkness, Light: Essays in Honor of R.C. Sproul

The five points of Calvinism and five “solas” of the Reformation are hallmarks of a Reformed understanding of Scripture. In this refreshing exploration of those truths, ten prominent contributors pay tribute to R. C. Sproul, whose name is virtually synonymous with these treasured Reformed distinctives. Contributors and topics include:

The slogan Post Tenebras Lux—After Darkness, Light—described the dawn of a new era of understanding in the church during the Protestant Reformation. Today that same light of Scripture calls us out of the darkness of false teaching and misguided practice, to a renewed apprehension of our glorious, sovereign Savior.

R. C. Sproul Jr. (MA, Reformed Theological Seminary, Orlando; DMin, Whitefield Theological Seminary) is a pastor at St. Peter Presbyterian Church, Bristol, Tennessee, and director of the Highlands Study Center, Meadowview, Virginia. He is also editor-in-chief of Every Thought Captive. Sproul has authored several books including Tearing Down Strongholds, Almighty Over All, Playing God, and Eternity in Our Hearts. He also writes a regular column for Homeschooling Today magazine. R. C. and his wife, Denise, have six children.

This book was a compilation of essays in honor of R C Sproul. In doing so, they brought in the most articulate Reformed scholars around. For those who want to know a little more about Dr Sproul's life, there are a few brief bio's in the book which are interesting to read.
The set up of the book is the five points of TULIP interspered with the historic Solas of the Reformed faith. The best chapter was easily the one on Sola Fide by Sinclair Ferguson. I have read many popular level introduction of Faith Alone by many good scholars, Sproul included, but this is clearly the best. A quote in distinguishing great and little faith, "These different degrees of faith have in view the extent to which we respond to God in a manner commensurate with the greatness and trustworthiness of his promise." That is only a sample of the erudite, yet understandable nature of the book. Other good chapters are Mike Horton, "Sola Gratia," and John Macarthur, "Solus Christus."
The Book is highly readable (I read mine in 24 hours) and yet very scholarly. By all means take up and read! - Jacob Aitken