Hope in the Midst of a Hostile World by George M. Schwab (Paperback) 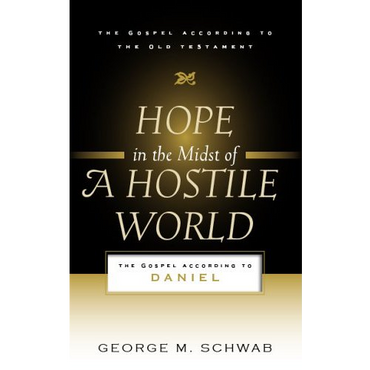 Hope in the Midst of a Hostile World by George M. Schwab (Paperback)

Demonstrates how believers living among unbelievers, and as citizens of countries with increasingly hostile governments, have opportunity to reveal God-inspired wisdom and discover hope. “God reveals the future to affect the present. Prophecy glorifies the One in control, inspires believers’ confidence, intensifies hope for God’s will to be done, and moves people to repentance and holiness. This study of the book of Daniel highlights these essential aspects of prophecy. Given the mysterious symbolism throughout Daniel, not every reader will agree with Schwab’s interpretation of this or that detail. But his focus is clear: God’s absolute control and unrelenting resolve to accomplish his redemptive purpose in Christ should give God’s people in every age hope in the midst of a hostile world. ” —Michael P. V. Barrett, President, Geneva Reformed Seminary

George M. Schwab (MDiv and PhD, Westminster Theological Seminary) is associate professor of Old Testament at Erskine Seminary. He is also a teaching elder and a trained biblical counselor. Dr. Schwab has written numerous articles in Old Testament studies and is a contributor to the Expositor Bible Commentary series.
Endorsement
One of the problems I have always had with books dealing with the Book of Daniel was that there has always been a specifically premillennial point of view toward the study that is so strong that it drowns out many of the other messages that are found in the Book of Daniel. And while I admit I am a PreMill, I also want to see what the Book being examined has to say besides who or what the Beast or the Statue in Daniel pertains to right now. In other words, so many eschatological scholars try to fit the prophecies found in the Book of Daniel into today's prophetic undertow, that the rest of Daniel is, sadly, skipped or at least skimmed. This then does not do justice toward the Book of Daniel. The book of Daniel has more to often than to just tapping it to whatever Tim Lahaye has to say right now (I say with a bit of saddened bemusement). Not so with Professor Schwab's book. Professor Schwab's book looks to the very heart of what Daniel had to say to the readers when it was circulated ages ago, along with what the book has to say to each of us as a Christian today. What is the message toward pagan idolatry, how does it fit in what was happening to the Jewish exiles of the time and how does it fit in with what we see today in modern society? Just how close is today's humanistic, antiChristian bigotry like the bigotry toward those who were faithful to Yahweh during the time of the exile in Babylon? How does Daniel speak toward the faithful to Yahweh when faced with persecution (whether being thrown into the fire or thrown into the lion's den), and what does this messages speak toward Christians throughout the past two thousand years of Christianity? Schwab's book contains many answers, or at the very least, pointers toward where you can find the answers through God's guidance. If you wish to truly gain a better appreciation toward the Book of Daniel, I suggest that you look no further and focus your attention on this book.