Holding Georgia for Geneva: P.H. Mell and the Baptist Defense for Calvinistic Orthodoxy 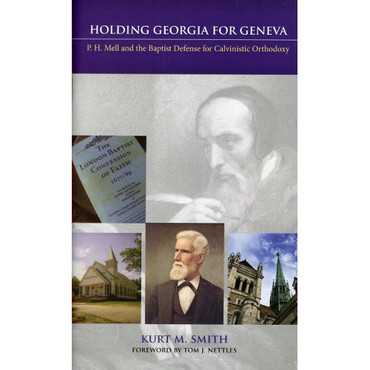 Holding Georgia for Geneva: P.H. Mell and the Baptist Defense for Calvinistic Orthodoxy

Kurt Smith begins this powerful treatise with these words:

"When I think about the predominant view of historic Evangelical Calvinism among Southern Baptists in our day, I am reminded of what Judges 2:10 lamented over a particular generation in the nation of Israel: 'And there arose another generation after them who did not know the Lord or the work that he had done for Israel.'

But we have to ask: Is this true? Is this what the actual record of history proves about Southern Baptist doctrine? If we peruse the primary source material of Baptists in the South during the late 18 th century into the 19 th century as a whole, we will discover that for these Baptists, Evangelical Calvinism was believed, confessed, preached, and defended in bold relief. Moreover, it was not a so-called 'moderate' Calvinism, but a thorough 'Five-Point' Calvinism which they held so dear. And this was especially true of Georgia Baptists during this period in history.

In fact, so strong and uncompromising were their convictions Calvinistic doctrine that, as Baptist historian, Dr. Gregory Wills, affirmed: "From one corner of the state to another, churches and associations defrocked preachers for questioning Calvinist doctrines, criticized even slight alterations in Calvinist creeds, and blocked fellowship with doctrinally careless congregations. Just as the Georgia Association disfellowshiped Jeremiah Walker and his Arminian followers in 1790, so the Sunbury Association refused to alter their creeds from 'eternal election of a definite number' to 'election according to the Scriptures.' Throughout the nineteenth century, the Calvinists won victory after victory. They held Georgia for Geneva."

And among these Georgia Baptists who 'held Georgia for Geneva,' there was no voice with greater clarity and consistency than Patrick Hues Mell."

Tom Nettles opens his Foreword with these wordas - "Kurt Smith has produced an excellent volume reflecting the spirit and doctrine of P. H. Mell. This is not a detached, sapless, unimpassioned discussion, but biography put to the task of advocacy. The discussion accurately unfolds Mell's earnestness for Calvinism as biblical doctrine, profitable for evangelism, church purity, and personal sanctification. At the same time it presents what Kurt (I join him in this) believes is healthy biblical doctrine for the twenty-first century Baptist as well as the nineteenth-century Baptist."

"Kurt Smith has done an enormous service to Baptists all over the world in bringing out of the shadows of relative obscurity a great servant of Jesus Christ. SmithÆs easily read and well documented small biography of P.H. Mell, his life, labors, and doctrine, is stimulating and immensely welcomed. Every Christian, regardless of his denominational affiliation, should read this booklet and become better equipped to declare the glorious, all-powerful gospel that Mell believed and expounded, and which shaped the Christian world of the 19th century." - Earl M. Blackburn Senior Pastor, Heritage Baptist Church Shreveport, Louisiana

KURT M. SMITH is the pastor of Providence Reformed Baptist Church in Pine Mountain, Alabama. He is the author of 'Remembering Luther's Fight' and co-author to 'The Gospel Heritage of Georgia Baptists: 1772-1830' - both published by Solid Ground Christian Books. He is also a contributing author to the multi-volume series, 'A Noble Company: Biographical Essays on Notable Particular-Regular Baptists in America', published by Particular Baptist Press. He and his wife, Lorrie, have three children.