George Whitefield: God's Anointed Servant in the Great Revival of the Eighteenth Century 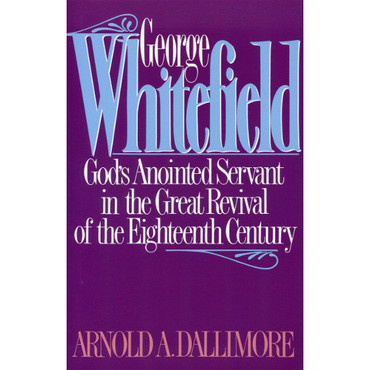 George Whitefield: God's Anointed Servant in the Great Revival of the Eighteenth Century

God's accomplishments through George Whitefield are to this day virtually unparalleled. Even during his lifetime Whitefield was considered "the most brilliant and popular preacher the modern world has ever known." In the wake of his fearless preaching, revival swept across the British Isles, and the Great Awakening transformed the American colonies.

When Whitefield died at age 55, he had preached 30,000 sermons. His hearers included not only the poor and the uneducated, but prominent English aristocrats and American statesmen such as David Hume and Benjamin Franklin.

Christians today continue to take courage from Whitefield's humility and deep spirituality. A founder of Methodism, he yielded his leadership to John Wesley rather than risk splitting the movement, thus revealing his fervent commitment to the gospel of Christ rather than to personal plans or hopes.

The previous two-volume work, receiving critical praise and popular acceptance, is here condensed into one magnificent volume. A great inspiration to the followers of Jesus Christ in today's pressured world.

"I feel a permanent debt of gratitude to Dr. Dallimore. His wonderful two-volume study of Whitefield is one of the great biographies of the Christian Church. I share his hope that many more Christians will find this shorter version as enjoyable and stimulating!" --Sinclair B. Ferguson, Westminster Theological Seminary

ARNOLD A. DALLIMORE was a Baptist pastor for thirty-eight years and a successful biographer of Christian leaders. His books include A Heart Set Free: The Life of Charles Wesley and Spurgeon: A New Biography.

In George Whitefield: God's Anointed Servant in the Great Revival of the Eighteenth Century, Arnold Dallimore gives us a fast moving 200 page version of his 1200 page, two-volume biography of Whitefield.

George Whitefield grew up in England and attended Oxford with his friends John and Charles Wesley. These young men shared a passion for the Lord and for Evangelism, but differences in doctrine drove them apart. Whitefield held to the doctrines of grace: "I embrace the Calvinistic scheme, not because Calvin, but Jesus Christ has taught it to me." John Wesley, on the other hand, viewed Calvinism as heresy. Despite this, the three maintained a love for each other throughout their lives. Even after bitter controversy, John Wesley preached Whitefield's funeral.

Whitefield began preaching in the open air--sometimes to crowds estimated at near 80,000--while still in England. He continued this in North America, where he served as a missionary. While there, he became friends with Benjamin Franklin, and his preaching, along with that of Jonathan Edwards, was instrumental in bringing about the Great Awakening.

Dr. Dallimore calls Whitefield "the greatest evangelist since the apostle Paul." There is no doubt that he had an extraordinary love and burden for sinners; tears often streamed down his face while he pleaded with them to come to Christ, and he considered himself "the servant of all." When he died at 55, he had preached 30,000 sermons. Even when his doctor told him that he had to quit preaching and rest, he kept on. The night of his death, while on his way upstairs to bed, he paused to preach to a small group that had come to the door begging him to share the gospel. He preached until the candle in his hand burned out, and then he went to his final rest.

Biographies are often the most interesting, encouraging, and edifying books that I read. I consider this one of the best. It is hard to put down, and it's hard to read without being changed.