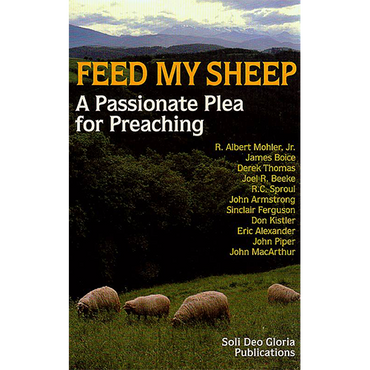 James Montgomery Boice (1938-2000) was pastor of Tenth Presbyterian Church, Philadelphia from 1968 until his death in 2000. He served as Chairman of the International Council on Biblical Inerrancy and was a founding member of the Alliance of Confessing Evangelicals. He was a prolific author and published over 50 works.

Derek W. H. Thomas, a native of Wales, graduated from Reformed Theological Seminary in 1978 and later earned a Ph.D. from the University of Wales, Lampeter. He served as a pastor in Belfast, Northern Ireland, for seventeen years.

He returned to the United States in 1996 to become the John E. Richards professor of systematic and practical theology at the Jackson campus of RTS. He also serves as the minister of teaching at First Presbyterian Church in Jackson.

Dr. Thomas has served as editor of the Evangelical Presbyterian, a monthly denominational magazine, and is the editorial director for the Alliance of Confessing Evangelicals and editor of its online magazine, Reformation 21 (www.reformation21.org).

Joel R. Beeke is President and Professor of Systematic Theology and Homiletics at Puritan Reformed Theological Seminary and pastor of the Heritage Netherlands Reformed Congregation in Grand Rapids, Michigan. He has written numerous books, including several for children. He and his wife Mary have three children.

R.C. Sproul has served the church as a seminary professor, preacher, and author for more than forty years. He is the founder and chairman of Ligonier Ministries and can be heard teaching daily on the radio program "Renewing Your Mind", which broadcasts on more than 300 radio outlets in the United States and throughout 50 countries. Dr. Sproul has written more than 60 books and serves as Senior Minister of Preaching and Teaching at Saint Andrew's Chapel in Florida.

Sinclair B. Ferguson is Associate Preacher at St Peter's Free Church in Dundee and also Distinguished Visiting Professor of Systematic Theology at Westminster Theological Seminary, Philadelphia, Pennsylvania. He was Senior Minister of First Presbyterian Church of Columbia, South Carolina and prior to that, he was minister of St. George's-Tron Church in Glasgow.

John Piper has been trading markets since the mid 80s, mainly writing options but also trading futures, spread and binary betting. The highlights have been trading right through the '87 Crash (mainly selling put options - hence the lack of hair!), annual turnover exceeding 2m of option premiums on his personal account, managing money in excess of $1m, winning a TV trading contest, and generally spending far too much time glued to screens. Whilst abusing himself in this way he also decided to help other traders and started The Technical Trader in 1989 and which has become the leading trading newsletter in the UK. The newsletter filled a void and the business has helped many traders over the years and is now on the web. Over the years John has developed a number of trading techniques; he summarizes his approach as Psycho-Trading - meaning getting into the mind of the market. John spends his time in the Sussex Hills but makes frequent trips to warmer climes with the Hash House Harriers - a club for those who like a drink but who have a running problem! John runs a market service looking for the BIG calls and has written several books including The Way to Trade, The Fortune Strategy, Profit Before Work, Binary Betting, Binary Trading, Tunnel Trading, Trading is a business and The KrautGap Modules.

Widely known for his thorough, candid approach to teaching God's Word, John MacArthur is a popular author and conference speaker and has served as pastor-teacher of Grace Community Church in Sun Valley, California, since 1969. John's teaching is available around the world through his media ministry, Grace to You. In addition to producing daily radio programs for nearly 2,000 English and Spanish radio outlets worldwide, Grace to You distributes books, software, audiotapes, and CDs by John MacArthur. John is president of The Master's College and Seminary and has written hundreds of books and study guides, including the bestselling "The Gospel According to Jesus" and "The MacArthur Study Bible", a 1998 ECPA Gold Medallion recipient. John and his wife, Patricia, have four grown children and fourteen grandchildren.

Biblical preaching is nearing extermination in our day. There is "sharing," "suggesting," plenty of storytelling, and lots of preaching to "felt needs." But the authoritative, expositional opening of the Word of God is more rare to find all the time. This book is a plea for preachers to "preach the Word." In the Old Testament God decried the fact that His people were perishing for lack of knowledge about Himself. Too often, those who have been called to feed Christ's sheep do little more than pet them instead of feeding them the Word of God. This book is for pastors and people alike. It will encourage pastors to strive to maintain their calling. It will guide congregations in holding their pastors to this Biblical standard.

Contributors to this book argue that the preached word of God has become a diminished part of Sunday morning worship service in the United States. Pastors and their congregations want other means of worship to be more prominent. When the pastor does preach, less is spoken about what is written in the Bible, but a form of psychology and/or an alternative World view is `shared'. Seeking more bodies in the pews, God's word has been left behind.

of which I became a minister according to the divine office which was given to me for you, to make the word of God fully known, the mystery hidden for ages and generations but now made manifest to his saints. (Colossians 1:25-26 RSV)

It is the Pastor's job to proclaim God's word to inspire the listener to seek the will of God and to correct the hearers of God's word in any misimpression of God's written word and direct disobedience to God's word:

Him we proclaim, warning every man and teaching every man in all wisdom, that we may present every man mature in Christ.
(Colossians 1:28 RSV)

John Montgomery Boice tells how God chooses to bring salvation into a person's life. The proclaimed word of God should tell of man's sinful state and his ultimate destination is hell. No one can avoid his just reward unless another takes the punishment for his sin. Jesus has done this for those who accept Him as Lord and Savior. God chooses man to spread the good news. Through the Holy Spirit God works upon man's heart. Boice further argues God's word is the chief means of Spiritual growth in God's church. To bring further comprehension of God for those that are already saved.

And not only so, but we glory in tribulations also: knowing that tribulation worketh patience; And patience, experience; and experience, hope: And hope maketh not ashamed; because the love of God is shed abroad in our hearts by the Holy Ghost which is given unto us. (Romans 5:3-5 AV)

A sermon should be written to teach doctrine. A better comprehension of God and His will has an effect on the listening Christian. The more correctly one understands God, the better chance one will walk closely with God. One's comprehention of God will effect how one praises God through song, prayer, scripture reading, fellowship with fellow Christians, and other means to communicate thanksgiving and reverence towards God. Experience in Christ effects how one routinely prays through the day and the setting aside time for formal prayer. How one serves inside the church and serves those outside the body of Christ. Christians should not neglect fellowship with like believers. They should always be willing and able to defend their faith.

R.C. Sproul contributes with a piece on how the preacher ought to be an educator. Preaching is not to be a diversion or entertainment. Knowledge acquired will be used in one's daily walk. The preacher is not to be bashful, but bold. Freely telling his listeners the word of God, because he has the assurance of the Holy Spirit and that he is correct understanding of the bible. Likewise the Christian is to boldly to defend his faith to the world. "Luther was convinced that preachers ought to preach the law as well as the Gospel. Unless the law is set forth clearly and unambiguously, people will never have an appreciation for it." According to Sproul preaching Law and Gospel will cause conflict, because it reveals sin. When people avoid talking about the law, the heartfelt need for the Gospel grows dim. Effective preaching does cause conflict and enlightens us to God's truth.

The subject of a sermon should ultimately be about God, truths given by God, and wisdom provided by God. The preacher is to depend on Scripture and guidance of the Holy Spirit. Those called to be pastors do have a spiritual gift to speak and the ability to reason. One called to share God's word may lean away from the Holy Spirit, but instead lean upon one's own understanding.

John Piper argues preaching is an expository exultation with the aim to glory to God through Jesus Christ. Exultation of God should be a regular part of the Christian life. God is glorified when his people are content in Him. Suffering happens to Christians. Suffering is done by design through God. When a Christian suffers it endangers the individuals contement in Jesus. Through use of several scripture references, John Piper illustrates that Christians do suffer from other men because of their faith. He also illustrates through scriptural passages that the Christian will suffer injury, pain, and illness that is common to all men. God purposes suffering in the Christian life. God wants His followers to be content in Him even when suffering. Preaching involves telling the whole truth. God's sovereignty and the accompany suffering of His followers is part of the Chistian message. Jesus taught the disciples why he must suffer, why His disciples must suffer, and that commom human suffering brings glory to God. The Paster should preach so the Christian is equiped to endure suffering. This includes the message to have joy in the Lord despite and because of one's own suffering.