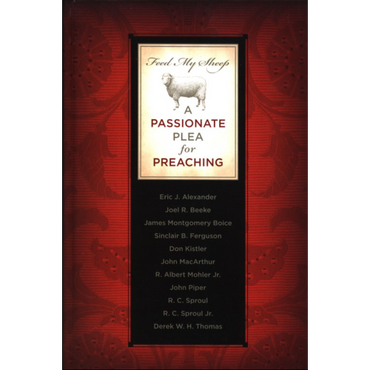 Joel R. Beeke is President and Professor of Systematic Theology and Homiletics at Puritan Reformed Theological Seminary and pastor of the Heritage Netherlands Reformed Congregation in Grand Rapids, Michigan. He has written numerous books, including several for children. He and his wife Mary have three children.

Sinclair B. Ferguson is Associate Preacher at St Peter's Free Church in Dundee and also Distinguished Visiting Professor of Systematic Theology at Westminster Theological Seminary, Philadelphia, Pennsylvania. He was Senior Minister of First Presbyterian Church of Columbia, South Carolina and prior to that, he was minister of St. George's-Tron Church in Glasgow.

Kistler is the founder and president of Soli Deo Gloria Ministries, Inc.

John MacArthur is pastor-teacher of Grace Community Church in Sun Valley, California, as well as author, conference speaker, president of The Master's College and featured teacher with Grace to You, an international radio broadcast. His more than six dozen books have sold millions of copies worldwide and include more than two dozen volumes of The MacArthur New Testament Commentary series.

John Piper (DrTheol, University of Munich) is the pastor for preaching and vision at Bethlehem Baptist Church in Minneapolis, Minnesota, where he has served since 1980. He is the author of more than forty books, including "Desiring God", "The Pleasures of God", and "Let the Nations Be Glad!", and thirty years of his preaching and teaching is available at www.DesiringGod.org. John and his wife, Noel, have four sons, one daughter, and an increasing number of grandchildren.

Derek W. H. Thomas, a native of Wales, graduated from Reformed Theological Seminary in 1978 and later earned a Ph.D. from the University of Wales, Lampeter. He served as a pastor in Belfast, Northern Ireland, for seventeen years.

He returned to the United States in 1996 to become the John E. Richards professor of systematic and practical theology at the Jackson campus of RTS. He also serves as the minister of teaching at First Presbyterian Church in Jackson.

Dr. Thomas has served as editor of the Evangelical Presbyterian, a monthly denominational magazine, and is the editorial director for the Alliance of Confessing Evangelicals and editor of its online magazine, Reformation 21

The apostle Paul declared that “what we preach” was “folly” in the eyes of many in his time (1 Cor. 1:21). Such is always the world’s response to the gospel. But in our day, it seems that the method behind Paul’s message—preaching—is itself an object of ridicule, even within the evangelical church. In an age of short attention spans and entertainment “consumers,” many churches are yielding to pressure to set aside preaching in their worship services in favor of more “relevant” methodologies.

In Feed My Sheep: A Passionate Plea for Preaching, an outstanding team of pastors and scholars says to the modern church: “Turn back!” Preaching is not just one of many acceptable methodologies that the church may employ as the cultural landscape changes. Rather, the preaching of God’s Word is the biblically mandated method by which unbelievers are to be converted and churches built up in the faith.

This book reveals the biblical basis for preaching, sketches the way it ought to be practiced, and shows the many practical benefits that flow from strong pulpits. Here is encouragement for preachers and wise counsel for those who desire to sit under the ministry of the Word of God preached.

The book calls pastors to preach God's word in their churches. This sounds simple, but the truth is many preachers spend much time in the pulpit entertaining their congregations. The authors call modern pastors to preach God's Word and to hold nothing back. Pastors are called to deliver God's message of salvation unflinchingly and to refrain from fads, styles and popular topics.

If pastors are not causing their hearers to squirm they are not focusing on the gospel. God's Word is offensive to sinners and they should be convicted when hearing it. Gospel messages that make us feel good about our sinful state and help us learn how to fit Christ into our busy lives are not Christ centered, but man centered.

Rarely do you hear a church described, first and foremost, by the character, power, and content of its preaching. This is because few preachers today are true servants of the Word. The authors tell us the gospel is the most transformative, the most powerful, and the most explosive message there is. If pastors have a problem finding something to preach, then they are not preaching the gospel.

Preachers that pander to the sinner and avoid preaching the convicting truth of the Bible are not honoring our Father in their ministry. Jesus called pastors to fulltime ministry to shake listeners from their man-centered life and into a life dedicated to him. This radical transformation cannot take place if we are not challenged from the pulpit.

From top to bottom these authors live their advice for pastors to teach the truth, uncomfortable or not. This book is a solid reminder of all preachers, but it is also a call to all congregants to insist on preaching in their churches that is substantive, Bible centered and God honoring.