Exegetical Lectures and Sermons on Hebrews 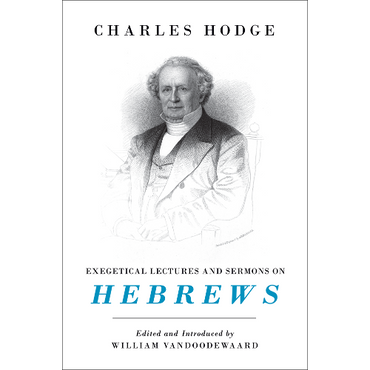 Exegetical Lectures and Sermons on Hebrews

This book has two parts, both of which contain material not previously published.

The first part contains Charles Hodge’s exegetical and expository notes on the letter to the Hebrews. These date from 1821, the year of his ordination, and 1842, when he delivered a series of lectures on Hebrews at Princeton Theological Seminary. Like his other published commentaries, this is an exegetical exposition, following Calvin’s pattern of brevity and simplicity. Hodge skilfully engages the Greek text in a way that enhances the reader’s understanding of the details and flow of the whole. Those familiar with Hodge’s commentaries on other New Testament epistles will immediately recognize his style and method. Broad themes and fine points merge together in a coherent whole, as the commentator allows the text of Scripture to speak for itself.

Also among the archival collection of Charles Hodge’s manuscripts at Princeton are a series of sermon outlines, and some full manuscript sermons, on passages from the letter to the Hebrews, most of which were never published. In 1879 A. A. Hodge included four of these as part of a wider collection of sermon outlines which were published following his father’s death as Princeton Sermons. These four sermons, along with all of Hodge’s other manuscript sermons on Hebrews are brought together for the first time in this volume.

The sermons on Hebrews in Part Two supplement the commentary in Part One, providing the reader with a more expansive exposition and application of numerous key sections of Hebrews. A few are more text-topical in their orientation, revealing Hodge’s masterful ability to communicate the rich themes of biblical and systematic theology with earnest clarity and simplicity. Others are more exegetical and expository, with application aimed at growth in Christian living. Together they display Hodge’s ‘adoring love for Christ,’ and even more, Christ’s love for his church.

‘Hodge’s method and matter make him doubly useful in commenting. He is singularly clear, and a great promoter of thought…The more we use Hodge the more we value him.’ — C. H. SPURGEON

‘One always turns to Hodge’s commentaries with great confidence, for in him there is that perfect blending of theology, scholarship and a devotional spirit which are the prime requisites of a commentary.’ — D. MARTYN LLOYD-JONES