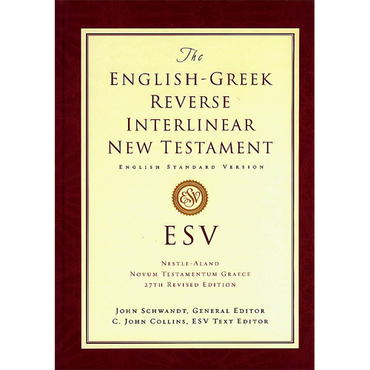 John Schwandt is a Fellow of Classical Languages at New St. Andrews College, where he teaches Greek and has previously taught Latin and Hebrew. He earned an M.A. from Westminster Theological Seminary and has since developed and is currently Director of the National Biblical Greek Exam (NBGE), an online exam that seeks to promote the study of biblical Greek.

This state-of-the-art reverse interlinear New Testament, created in partnership with The German Bible Society and Logos Bible Software, breaks with the convention of traditional interlinear texts by keeping the English as the top-line entry and placing the Greek text underneath it. This approach allows you to see firsthand the accuracy with which the translators of the English Standard Version of the Bible (ESV) rendered the Greek text. - 6.5" x 9.125" - 1,536 pages - Gloss dictionary based on the transliterated, inflected Greek - Free ESV Bible Resources Software offer included - Morphology of each word - Transliterations of all Greek words for easy pronunciation - Strong's numbers for effective cross-referencing to other study tools

`The English - Greek Reverse Interlinear New Testament, English Standard Version' is the third Greek English Interlinear translation I have bought, and I wish I had seen this one first. I was initially reluctant to try it, as it seemed less useful, since it was committed to a particular English translation. My old standby, the Greek - English interlinear translation by Robert Brown and Philip Comfort, published by Tyndale, has a parallel NRSV translation, but that can literally be ignored, as it is simply provided in the margin as a supplement, signposts to familiar ground, while plugging through the Greek and literal English translation. But, in many of my recent attempts to track down the meaning of a Greek word in the various lexicons and theological dictionaries, I found myself mired in the difficulties of dealing with all the various tenses, moods, numbers, voices, genders and cases. So, the word so plainly spelled out in the translation was often impossible to find in my Pitkin or Colin Brown. Here, John Schwandt and his team of translators and editors come to the rescue, with not one but four different resources for tracking down words in other references. The topmost line, unlike the Greek - English interlinear, is the English of the ESV translation. The second line is the corresponding Greek word in Greek script. The third line is a transliteration of the Greek into English characters. The fourth is a series of codes indicating the various parts of speech of the Greek in this context. The last and most important for us amateurs is the Strong's Number of the Greek word. Not only does this give us the means of looking the word up in Strong's concordance and any other reference which includes Strong numbers. Especially useful is the ability to find the word in Thayer's Greek - English Lexicon, which should be enough, with the transliteration, to find the base word in the big theological dictionaries.
A secondary use of this translation is that I suspect it may be more useful as a means of studying New Testament Greek than the more traditional Greek - English presentation. What makes this especially useful is the fact that the ESV translation is very close to being a word for word translation, allowing for some nominal crafting of word order and idioms into conventional English. While the translation is `modern', I believe it is somewhat less `politically correct' than the NRSV, which bends over backward to be gender neutral, even where gender specific words are appropriate in the Greek.
Nothing will eliminate the effort required of a person who does not know Greek to track down many words, but this book may be one of the best tools. And yet, I will keep the Greek - English interlinear handy as well, since the most important lesson I've learned in studying scripture is to never rely on a single source for anything, even the most rudimentary philological information.