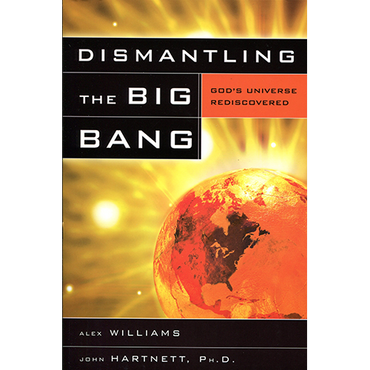 Why did Ptolemy's theory cause problems for the church? What is the big secret concerning the Age of the earth? Why do many scientists reject the use of design in explaining origins? The seemingly absurd idea that all matter, energy, space, and time once exploded from a point of extreme density has captured the imagination of scientists and laypersons for decades. The big bang has provided a central teaching for the eons of time of cosmic evolution, undermining the history and cosmology of the Bible. It is a theory that fails, even violating the very physical laws on which it is purportedly based. In this easy-to-read format, authors Alex Williams and John Hartnett explode this naturalistic explanation for the universe, and show that the biblical model provides a far better explanation of our origins. This fully indexed, illustrated analysis of the big bang theory is an invaluable help in understanding and countering a world view that is as chaotic and destructive as its name implies.

Dr. John Hartnett received both his B.Sc. and his Ph.D. with distinction from the University of Western Australia. He currently works as an ARC QE II post-doctoral research fellow with the frequency standards and metrology research group there. He has published more than 98 scientific papers in secular journals and has two patents. Alex Williams is a part-time science writer for Answers in Genesis. With a master of science degree in radioecology and a licentiate in theology, his career spans 26 years as a government botanist and 7 years in missionary work. He is married to Barbara and they reside in Beeliar, Western Australia.