The Marrow of Theology by William Ames (Paperback) 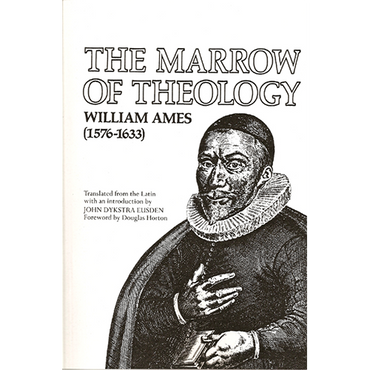 The Marrow of Theology by William Ames (Paperback)

William Ames (1576-1633) was educated at Christ's College, Cambridge, where William Perkins was his tutor. He attended the Synod of Dort as an English observer and there began to develop his reputation as a brilliant theologian. From 1622, he was professor of theology at the University of Franeker in Holland, where he attracted students from all over Protestant Europe.

William Ames' classic summary of seventeenth-century Puritan theology is once again available in its only modern English translation. Ames was one of the most influential theologians of his day, particularly among New England Puritans such as John Cotton and Thomas Hooker. He was, in fact, planning to travel to America at the time of his death. These lectures were first presented to students in Leyden in the 1620s, and their reissue will be of great interest to contemporary students of Puritanism.

The Marrow of Theology is composed of two books. The first summarizes the Puritan understanding of the traditional doctrinal elements of systematic theology. The second covers the more practical matters of the Christian life. Combined with John Dykstra Eusden's excellent introductory study of Puritan theological method, this volume provides an indispensible tool for the study of Puritanism and its influence on later theology.

"In this work we not only learn much about Puritanism in old England and new, but we can analyze a stream of Christian life and thought that has to some degree helped to shape many of us, our contemporaries, and our institutions." - Robert Handy, Union Seminary Quarterly Review