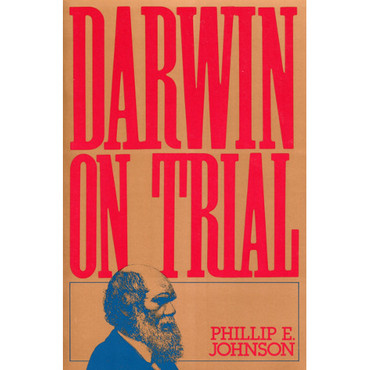 In his own era, Darwin's most formidable opponents were fossil experts, not clergymen. Even today, according to the author, the fossil record, far from conclusive, does not support the presumed existence of intermediate links between species. A law teacher at UC-Berkeley, Johnson deems unpersuasive the alleged proofs for Darwin's assertion that natural selection can produce new species. He also argues that recent molecular studies of DNA fail to confirm the existence of common ancestors for different species. Doubting the smooth line of transitional steps between apes and humans sketched by neo-Darwinists, he cites evidence for "rapid branching," i.e., mysterious leaps which presumably produced the human mind and spirit from animal materials. This evidence, to Johnson, suggests that "the putative hominid species" may not have contained our ancestors after all. This cogent, succinct inquiry cuts like a knife through neo-Darwinist assumptions.

Dissecting the writings of Gould, Futuyma, Darwin, and Dawkins with a trenchant sword, law professor Johnson uses an attorney's reasoning to scrutinize the scientists' logic in defining the theory of evolution. Contending that science has distorted research rules to exclude Divine Creation in explaining the diversity of life, Johnson challenges the tenets of natural selection and the evolutionary evidence from fossils and genetic and molecular sources. In the closing chapters, he deals with Darwinism in education and in religion, stating that the evolutionary theory is protected for its "indispensable ideological role in the war against fundamentalism." While the book presents a skewed view of the scientific process, occasionally losing all pretense of objectivity, it may be of value to lay readers seeking a creationist perspective on evolution.
- Frank Reiser, Nassau Community Coll., Garden City, N.Y.