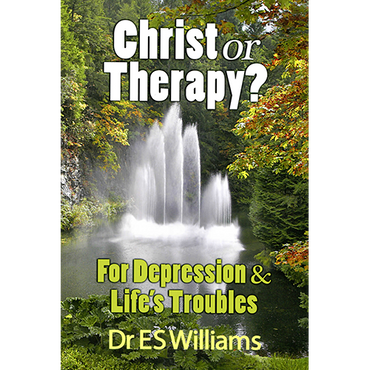 It is not widely realised that there is an irreconcilable difference between the remedies for sadness and grief set out in the Bible, and those put forward by the world of psychotherapy. A gulf also exists between the biblical policy for marriage, and that proposed by secular marriage guidance psychologists. Many well-known evangelical authors and churches, however, have turned entirely to the secular remedies and policies in these matters.

This book shows what the differences are, including a remarkable review of depression in the Bible, and its relief.

This is the keenly awaited sequel to an earlier book - The Dark Side of Christian Counselling - by medical doctor Ted Williams.

Dr E S Williams was Director of Public Health for Croydon Health Authority for many years. He is the author of several books and numerous research papers in medical journals.
Endorsement
This is a very fascinating book, as well as one which goes completely against the grain of current thinking. While Dr Williams does not dismiss or reject the fact that people and Christians can have depression which requires medical treatment, his thesis is that too much of what is called depression (and thus treated as depression with drugs and `christian' therapy) is not truly depression, but a cast down soul. Using scripture and the Psalms in particularly he shows that a cast down soul is to be expected as a believer but, the remedy is to trust in the promises of God and to be encouraged with the help of fellow believers. Dr Williams is very disdainful of current Christian `Counseling' practices that draw from the `world' rather than biblically based encouragement. The bottom line for Williams is that the first port of call for someone thinking they are depressed is the scriptures, the promise of God, prayer and the encouragement of other believers. A truly fascinating read.