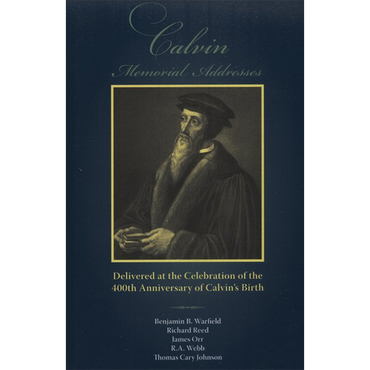 "As we approach the occasion of the 500th anniversary of John Calvin's birth, and eagerly anticipate the production of the many excellent historical and theological works that will mark the first half-millennium of Reformed Christianity, this set of essays from the beginning of the 20th century may serve both to edify us and to whet our appetites for more. One will find giants among the contributors (from Reed to Johnson to Orr to Warfield to D'Aubigne), and topics of abiding interest." - Dr. Ligon Duncan "Any title on such themes, with not a few eminent authors contributing, has to be a book we shall all value seeing." - Iain H. Murray "We are on the verge of the 500th anniversary of the birth of the French Reformer John Calvin, and it is good to look back at the way his life and ministry were appreciated at the 400th anniversary of his birth. It can be rightly said that if Calvin had not lived, the entire course of Western history, and in particular that of the Church, would be very different, and these essays document that fact very clearly. Against various attacks that had been leveled against the great Reformer in the nineteenth century, these essays demonstrate the tremendous good that Calvin did for the Church and the way that his life was truly lived to the glory of the God of Scripture. Though a hundred years old, these essays are still vital reading for anyone interested in the legacy of Calvin and the ongoing impact of his thought." - Dr. Michael Haykin "As we swiftly approach the 500th anniversary of Calvin's birth and anticipate another flurry of books and essays in honor of the Genevan Reformer, 'Calvin Memorial Addresses' is a good place to begin our celebration. The contributors and the contributions warrant this reprint edition. The greatest worth of this reprint, aside from reminding readers of Calvin and his contributions to the church and the world, is the showcasing of past scholars who ought to be remembered and still have worthwhile things to say to the Church. Honor the LORD as you celebrate the 400th anniversary of Calvin's birth again." -Dr. C.N. Willborn The General Assembly of the Presbyterian Church in the United States gathered in Savannah, GA in May 1909 to celebrate the 400th anniversary of the birth of John Calvin. After an Introduction by Charles S. Wood, there are a full dozen excellent addresses that cover the incredible influence one man has had on the history of the world for centuries. The grace of God is evident in the life and labors of John Calvin, and this amazing grace is magnified in each and every address that was given nearly 100 years ago.